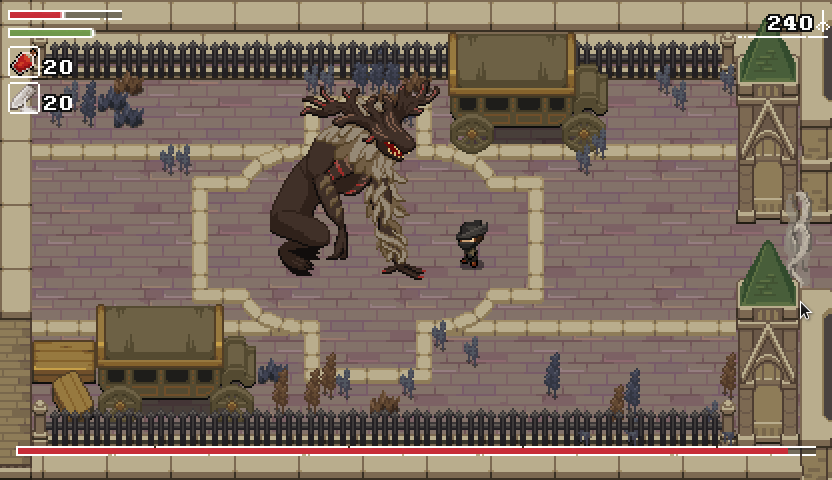 Everyone remembers Bloodborne, a defining FromSoftware title, as an especially appealing but punishing game marked by a Gothic, Victorian-era aesthetic. Max Mraz, an indie developer, released a free game known as Yarntown yesterday that reimagines Bloodborne as a top-down, 2D game reminiscent of classic Zelda titles. This creative remake was built by Max using the Solarus engine and depicts the first main area from Bloodborne, Central Yharnam. There are even bosses from the original FromSoftware RPG’s area to fight (and cheese) again!

While the combat itself isn’t nearly as difficult as the 2015 title’s is, it incorporates familiar mechanics such as dodge rolls or quicksilver bullets. The Hunter’s Dream has been recreated as well, so be ready to upgrade your weapons. Aside from the aforementioned bosses you’ll encounter, be ready to face enemies from the original RPG again. Huntsmen and rabid dogs of Yharnam– we didn’t think we’d see them again, especially not in such a cute style! It seems like this indie developer put a lot of work into a reimagination that old and new fans alike will enjoy.

Check out Max’s post on Twitter below for a look at this adorable remake (of an originally not-so-adorable game).

Adorable yet terrifying. Interested yet? If so, download the game free here and challenge yourself in Central Yharnam, again!

For some more Bloodborne fun, check out this upcoming Funko line featuring a figure of The Hunter!