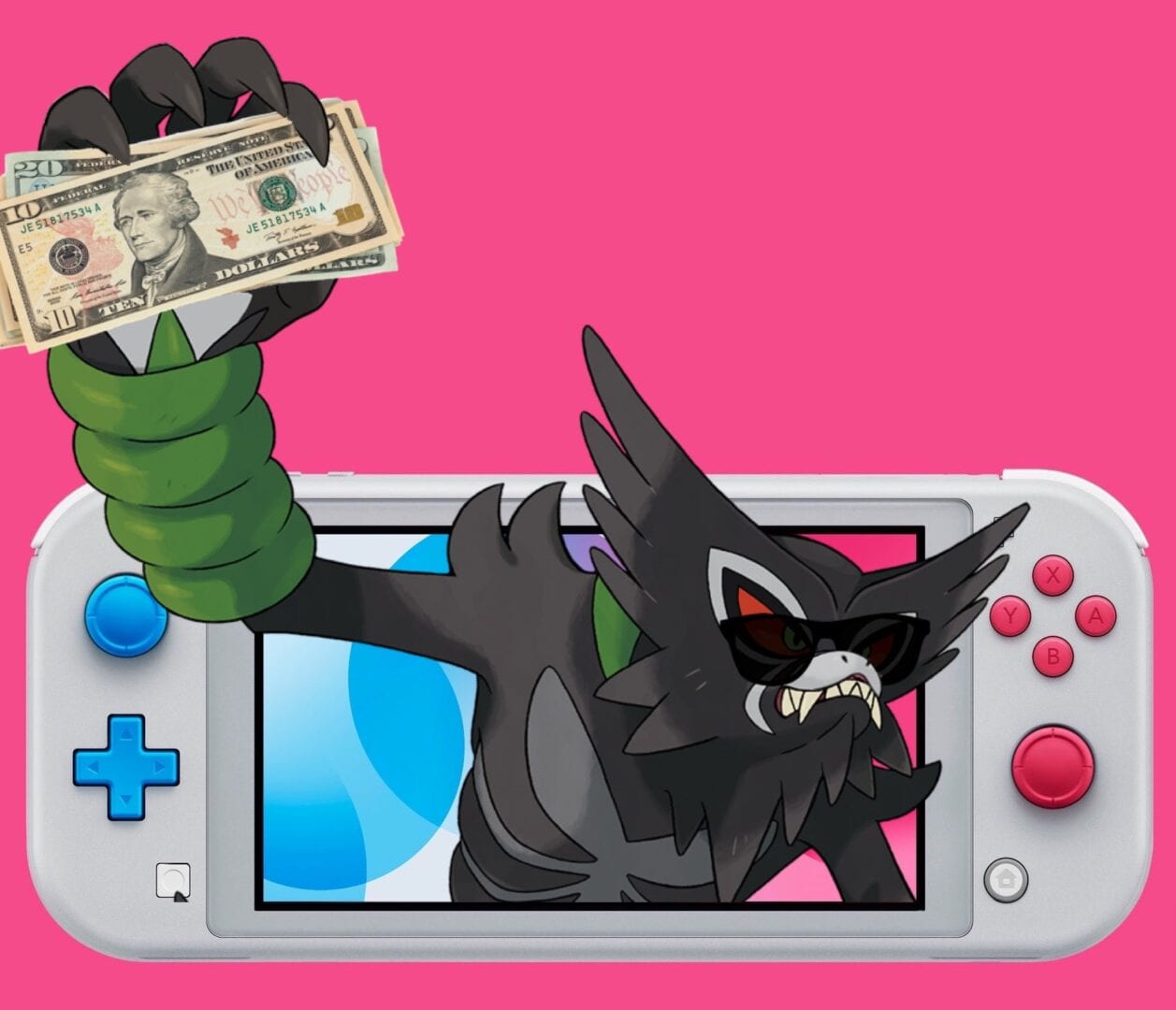 Being a Pokemon Master sure is an exhausting endeavor.

The games and merchandise may be marketed to kids, but make no mistake, this is a lifestyle for grown-ass men and women. Between the competitive battling, unexplained in-game mysteries, and Garbodor just being a tool in general, there’s a myriad of stressors that will make you pull your hair out, and/or pull the hair out of an unfortunate passerby.

Of all of the pressure points, however, none stand quite as tall as the concept of completionism. For more than twenty years, we were instructed to ‘catch ‘em all’ — at least up until Sword and Shield jettisoned the unworthy excess, tasking us instead with the far less marketable ‘catch ‘em some, I guess. Just buy the DLC and go away’.

Hundreds of hours sunk into seeking out that elusive Goomy on a rainy day, or gently coaxing your Golbat to evolve through sheer love (to be boxed thereafter for all eternity). Then, just when you think it couldn’t get any tenser, those damned mythical Pokemon resurface and the fandom is whipped into a frenzy.

Ever since the days of the humble Mew, mythical Pokemon have always been a cut above the rest. The fact that they can’t be obtained through conventional means renders them finite, and if you miss out the first go around, you can never be too sure if and when they’ll ever appear again.

Me personally, I have some serious issues with the notion of an incomplete collection. As I’ve discussed in a previous article, I once spent the majority of a work shift phoning various retailers in pursuit of a coveted Diancie code. It’s one of the many attractive qualities I bring as an employee, and perhaps not coincidentally, I’ve been fired no less than three times in my life.

And yet, I still have lapses every now and then. Despite my best efforts to stay in the loop, I only just found out about the short-lived Zarude promotion that came and went late last year, and once again, my Pokemon assemblage was threatened with imperfection.

Cue that gnawing, uncomfortable feeling, as the grotesque primate leered at me from beyond the void. Expedient trainers could obtain a code from their local retailer, or alternatively, nab the cheeky chimp by signing up for the Pokemon Trainer Club newsletter before the cutoff date of November 20.

Against all logic, my first recourse was to sign up for the newsletter immediately, some 45 days after the deadline. It was a long shot, but I thought maybe they’d throw me a pity code for my efforts. Alas, I received nothing, despite my decades of loyalty.

Zarude of them, wasn’t it?

The next stop was to trawl the internet to see if somebody had worked out a loophole. Those nerds with their computers, they were bound to be good for something, and — jackpot!! — Reddit was rife with helpful suggestions, albeit from mid-December when the promotion was still in progress.

Under the guidance of the world-renowned sage justacc123, I explored the various international options to net a last-minute distribution code. Would Gamestop Ireland prove an unlikely savior, or perhaps its counterparts in Germany and Italy? How about a curious French offshoot called Micromania, or this Swedish website that I think is openly swearing at me?

The idea of a foreign Zarude was even more enticing, and I followed the instructions to sign up for each website with glee. The more I looked at Zarude, the more I had convinced myself that he was indeed European, and as such, ought to be named Andre or Klaus. He’d drink espressos and ride a Piaggio scooter to his day job as a cobbler.

And by night? He’d do my bidding, diligently and without question, fulfilling his life’s ambition to be the plaything of a thirty-something shut-in from the southern hemisphere.

With every registration form I fumbled through in languages I barely speak (you should hear my French, it’s absolument affreux), I was met with further disappointment. The codes, you see, had been swept away quite some time ago, and my only reward would be eventual marketing campaigns for discounted products from countries I’ve never been to.

Honestly, when I get the first Swedish newsletter in my inbox, it’s going to be so damned confusing. The absurdity of that moment practically makes the whole thing worthwhile.

My hopes were dwindling by now. The GTS won’t allow for Zarude to be deposited (and yet it’s still perfectly okay for me to be stockpiling Bulbasaur like a madman), so I couldn’t acquire it via online trade.

The most responsible option was to wait until the next opportunity, whenever that may be. The original Japanese distribution was tied into preordering tickets to the upcoming movie; hopefully, that promotion would come to Australia as well? Surely the other attendees wouldn’t judge me for attending the children’s movie alone, right? I’m not a creep, I just needed a furry friend, you see.

But no. The limits of being a petulant man-child are nigh interminable, and my justification was downright admirable (I want it and I want it NOW). So I did the same as anyone seeking out a boutique animal; I turned to the black market.

Before long, I happened upon a potential suitor on eBay. This one offered not just a Zarude but a shiny Celebi and a pair of Master Balls to boot, all for the low, low price of $8 AUD, the equivalent to about $6.20 in USD.

It claimed 100% customer satisfaction and assured me that the contents were absolutely legal. Something about the idea that this person had almost 200 evil monkeys to sell sounded a little bit shady, but I wasn’t shopping for peace of mind — I was shopping for a piece of Zarude.

I anxiously clicked buy, and I waited. All going well, the dealer would be sitting right next to their Switch in a bid to offload their hot goods, and my itch would be scratched at last. I dithered about the Slumbering Weald for some low-level trade fodder, until that intoxicating notification lit up.

The seller was ready whenever I was, and you’d best believe I was ready now.

The true test would be whether they were stopped at the gate when I tried to export them to Pokemon Home, however. I’d only ever received one illegitimate Pokemon in my years of frivolous GTS trading (a pirated Arceus who is forever stuck in gen 5), but the stakes were higher than ever.

If a counterfeit was detected, it could result in a banning of my online capabilities, or a mass cull of my thousands of Pokemon stashed away. At the very least, it would be a waste of eight bucks.

When they successfully arrived at their final destination, a mighty cheer erupted from my gullet. Partly, because this kind of pure satisfaction so rarely happens in life, but mostly, because by now I had been drinking for half the day.

I had staved off PokeDex mortality for a little while longer, and could get back to whatever it was I did in my free time. As I went to close the browser, however, I noticed a related item on sale for a similar price — this one offered not only Zarude and Celebi, but an additional Zarude wearing something called a Dada Cape.

Are you kidding me right now? There’s a Zarude with a freaking cape?!

I glanced over at my Zarude, its once glossy sheen now dull and stagnant. It was so inglorious, so… capeless. What a disgrace. And so, I clicked buy and returned to the Slumbering Weald to obtain three more adorable trafficking candidates.

This isn’t the life I chose, it was merely the one I inherited after innocently picking up a Game Boy all those years ago. It’s an inescapable, demanding existence, and now that I’ve opened Pandora’s Box, I’ve gained the knowledge that buying Pokemon is much easier than obtaining them through honest means.

In hindsight, I think I became the real-life equivalent to one of the villainous in-game teams seeking world domination. I should feel guilty, but shame is a much lesser emotion than the exhilaration that comes from purchasing an army of fictional European monkeys.