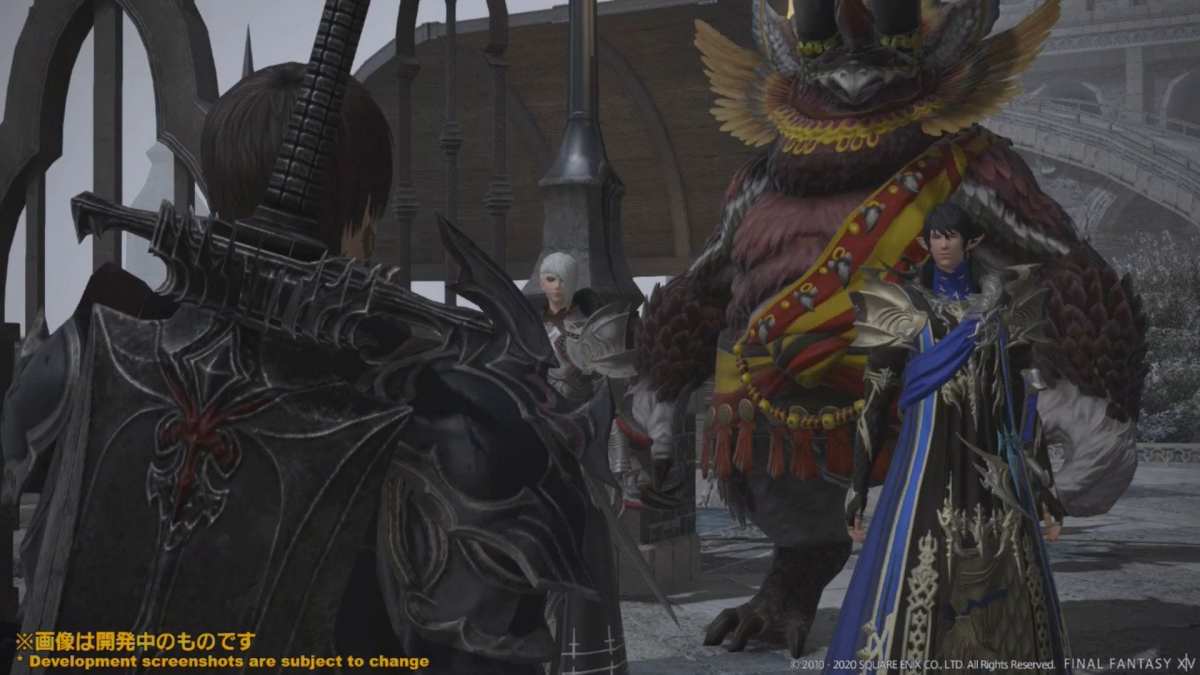 Today Square Enix broadcasted the first part of the 60th Final Fantasy XIV Letter from the Producer Live, focusing on the next major update, numbered 5.4.

Producer and Director Naoki Yoshida and Global Community Producer Toshio Murouchi provided a lot of information about the upcoming update.

Yet, before we move on to the next big one, Yoshida-san talked about 5.35 and showcased the equipment we can get in the Bozjan Southern Front battlefield.

Patch 5.4 will be titled “Futures Rewritten.” It will release in early December 2020. The development team is on track to release the update on schedule.

It will include (of course) new main scenario quests that will start a new chapter of the story and a new instanced dungeon titled “Matoya’s Relict” which will be compatible with the trust system. We see respectively a screenshot and artwork of the main story and dungeon.

A new “Chronicles of a New Era” questline will be titled The “Sorrow of Werlyt.” You can see a screenshot below. It’ll include a new trial that will have us fight against the Emerald Weapon and the extreme version (the specific title for the trial is still to be determined).

The new raid dungeon will bring back Eden with “Eden’s Promise” and its savage version. You’ll need to have completed the main story of update 5.3 to challenge this. Here’s a screenshot.

New job adjustments will include both PvE and PvP tweaks. Details will be revealed in the next Letter from the Producer Live. We do know that Monk will get some love with a change to how Greased Lightning works.

Blue Mage will also be updated with its level cap raised from 60 to 70, new spells, gear, and new duties added to the Blue Mage log.

The “Save the Queen” questline will also be updated with more upgrades to the Resistance Weapons and the battle titled “Delubrum Reginae.”

The normal version of this battle will include 24 players with no role requirements. The savage version will require 48 players and parties must be formed before entering.

Updates for crafters will include adjustments for actions that are less used and new crafting conditions for expert recipes which won’t involve recipes added before updated 5.4.

Gatherer updates will include a revamp to the collectible and aethereal reduction systems. The Collectible glove action will be removed and more. See the full slides and a screnshot below.

The Ishgardian Restoration will be updated with the fourth phase which will complete the restoration of Ishgard. It will be commemorated with a monument based on the crafting class with the greatest contribution within a certain period.

Skybuilder rankings will reopen with new items contributing to your seasonal score. Titles will be the same but the achievement will be new. This will also be the final ranking. Skysteel tools will get new upgrades.

A new trial will be selected to get the “Unreal” difficulty level. Yoshida-san believes fans will like this one when they learn what it is.

Treasure hunts will be updated allowing players to delve deeper into the secret of Lyhe Ghiah. We get to see new art for this.

Ocean fishing will also get upgraded with new routes and additional objectives that will add bonus points to the score. Players will receive a penalty for reembarking after abandoning a voyage.

Triple Triad will also get an update with a revamp of rules and UI to improve ease of play. New rules and periodically held tournaments will also be added.

A new ruleset will involve a battle against opponents with decks of randomly-selected cards. Yoshida-san said that it’s a pretty big update to the system.

UI will be adjusted. The Dora indicator can be changed to show the title before Dora. The discard pile indicates whether a tile is “Tsumokiri” (discarded immediately after it was drawn) or not.

Miscellaneous updates will include new violin instruments for the Bard’s performance, a new system for affixing multiple materia to equipment, and the ability to link quests in the chat window.

We get the confirmation that the game will be playable on PS5 via backward compatibility. The same settings available for PS4 Pro will be available in the System Configuration menu. Playing on PS5 will also enable quick load times.

Yoshida-san clarified that this should not be considered as the announcement of a dedicated PS5 version. They can’t share anything for now about that and he encouraged players to stay tuned.