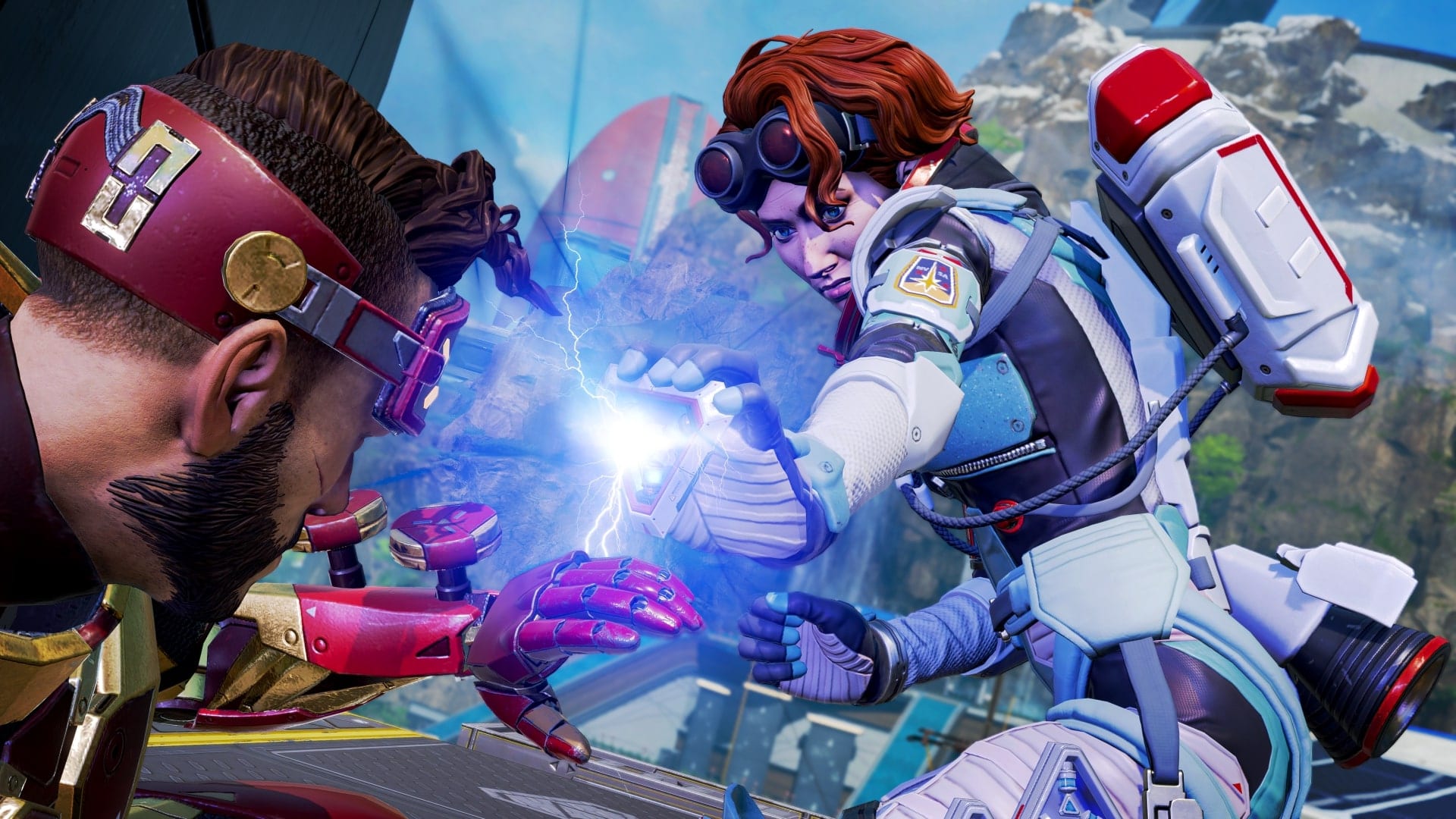 Apex Legends jumped into the battle royale scene out of nowhere in February 2019 when the game launched on the same day that the very first trailers were released. Fast-forward about a year and a half later, and Apex Legends Season 7 is about to begin.

Twinfinite was invited to attend an online preview event for Season 7, Ascension. Members of the development team provided details on what players can expect to see when Ascension goes live on Nov. 4.

Season 6 brought many changes to the game, but Respawn is bringing a lot more this time around in the form of a new map, a new character, and a new Club feature.

The new map, Olympus, is a futuristic city located high above the clouds. Unlike King’s Canyon and World’s Edge, Olympus actually feels like a city that people would live in.

It’s less of a Hammond drill site or project, and more of a space that’s meant to be lived in by civilians. This shows with the twin skyscrapers, city plaza, and laboratory areas.

This cityscape makes for a more “busy” environment for Apex Legends Season 7. Many of the points of interest within the map are near one another, linking together seamlessly. This makes them feel even more lived-in.

Even the “negative space” like grassy plains, or minimalist parks add to the map’s personality. Senior Level Designer Dave Osei explained that the goal for each map is to give it its own personality. The team certainly succeeded with Olympus.

Another unique piece of Olympus is the Trident – a vehicle that’s only available on this map. If you’ve ever spent an entire match running from one corner of a map to the other, the Trident is your solution in Apex Legends Season 7.

The Trident feels pretty fast for its size. It’ll easily get you where you need to go in no time at all. It also looks tanky even though it controls smoothly, which is interesting because it can’t be destroyed unless you drive it off the edge of the map.

It’s a great way to get from place to place quickly for rotations while potentially causing mayhem everywhere you go. Certain abilities like Rampart’s turret and Gibraltar’s dome shield can be attached to Tridents to make them effective while on the go.

If you’re on the receiving end of that Trident mayhem, you can temporarily put a stop to it by hitting the Trident with arc stars, or even Wattsons fences.

Osei also stated that Olympus is larger than King’s Canyon, but smaller than World’s Edge. One of the goals with the Tridents on Olympus was to make the map small enough so that the vehicles aren’t absolutely necessary, but large enough that they’d still feel useful.

If you don’t want to use the Tridents to get around Olympus, you can always use the Phase Runner portals to teleport to different locations. This teleport system runs in a ring around the map, so it’ll allow you to travel long distances almost instantly.

Dr. Mary Somers is joining the Apex Games as the new Legend, Horizon, in Season 7. She’s an astrophysicist with a few gravity-related powers.

Horizon can throw down gravity lifts, allowing her team to get a huge vertical boost. Though, the most fun way to use them is to throw them underneath opponents to send them flying, turning them into easy targets.

Her passive ability gives her more control in mid-air, just in case you do actually want to use her tactical ability for its intended use. It really feels like a more futuristic version of Octane’s jump pads.

Lastly, Horizon’s ultimate ability allows her to create a micro black hole with her robotic companion NEWT. It sucks other squads into a single area, giving you the chance to do serious damage with guns, grenades, and other abilities.

The black hole seems almost too strong in some ways. If you’re ever unlucky enough to get caught in one, you’ll have a hard time figuring out what’s going on visually. You can sprint to eventually escape the pull, but you may just be dead before you can succeed.

The biggest new feature in Apex Legends Season 7 that doesn’t directly involve gameplay is the addition of Clubs.

Game Designer Chad Armstrong went in-depth on what exactly the Clubs will mean for players. They’re essentially a smaller, more intimate version of the Networks from Titanfall 2.

Clubs allow a maximum of 30 players to group up to create a small community with the same goals, whether that be casual matches, ranked mode grinding, or anything in between.

If you’d rather not create your own Club, you can search for one using tags to narrow down your search for one that suits your needs. Up to five search hashtags can be added to a Club, including ones like #MicRequired, #TeamPlayersOnly, #BeginnersWelcome, or #LGBTQIA+Welcome.

Clubs seem like a nice way to avoid having to play with random players. All Clubs allow for crossplay joining, so friends (and future friends) across all platforms can become members of the same Clubs.

Once you’re part of a Club, you can send an invite out to all members in order to find someone to play with. It’s a much more focused Titanfall 2 Network system that Respawn plans to adjust as necessary in the future.

Season 7 of Apex Legends is really aiming to shake things up in a multitude of ways before the game comes to Steam next month, and the Switch in 2021. Let’s see how these changes pan out once Ascension goes live.