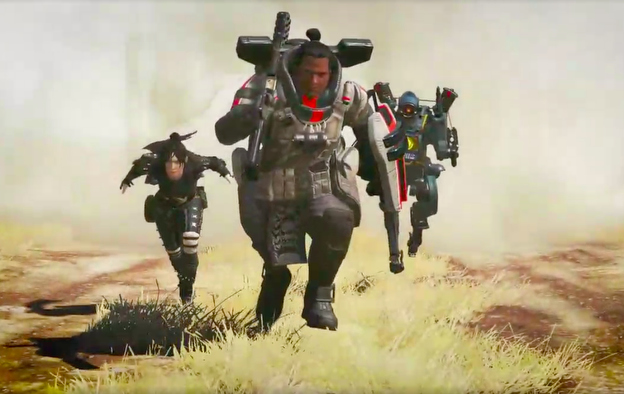 Respawn Entertainment has thrown their hat into the battle royale ring with Apex Legends, a new free-to-play title with a focus on lightning fast squad-based action that is available now.

Fully revealed in a stream held on Feb. 4, the game is an off-shoot of the Titanfallseries set in the same universe. Like other battle royale games, players are dropped into an arena alongside up to three other allies.

The team that manages to stay alive until the end of the match, or has at least one member left alive, wins.

Unlike other battle royale titles though, Apex Legends has several new elements not usually seen in the genre. If a squad member is killed, they can be revived by a teammate from one of several respawn points.

Doing so comes with its share of risks though, as these points are left out in the open and expose players to a potential death.

Players can likewise select a character from one of several classes, each with their own abilities and techniques. Some, like the Gibraltar, are heavily armored tanks built for extended combat.

Others like the Wraith are best suited for quick hits and stealthy kills, phasing in and out of areas with teleportation abilities.

Advancing through the game unlocks more classes as well, and each class plays off of the other to create different tactical options in matches.

Respawn also detailed its plans for future support of the game. Apex Legends will see a seasonal release of new content, with new events and gameplay elements introduced in the coming months based on player data and feedback.

They also stated that while transactions can be made to purchase in-game items, none have a bearing on actual gameplay and are purely cosmetic.

Thegame also received both a cinematic and gameplay trailer, both of which will be added to this article once they become available.

Apex Legends is currently available on PlayStation 4, Xbox One and PC. For more on the new title, check out the teaser footage released prior to the game’s reveal stream.