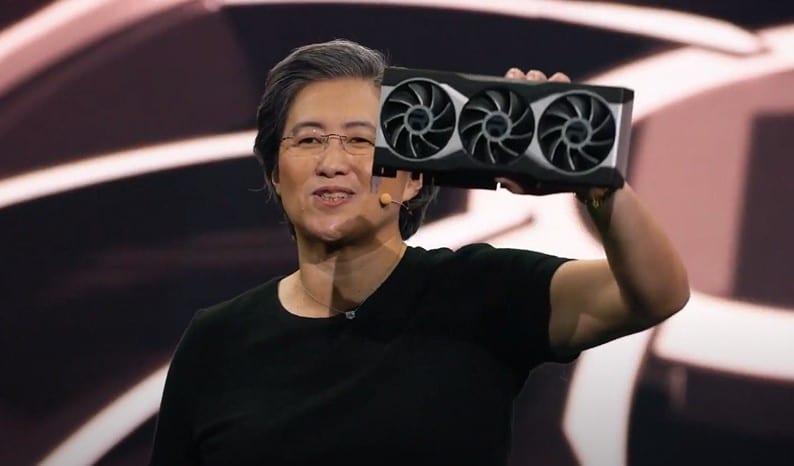 Earlier today, AMD revealed their next generation of GPUs that are built on the Big Navi/RDNA 2 architecture. The three cards that AMD revealed to the world in the RX 6000 series was the RX 6800, 6800 XT, and the RX 6900 XT

Each of these cards also features a super dense and fast type of cache that AMD is referring to as Infinity Cache. Ideally, this will increase the bandwidth on their cards so the GPU can receive instructions more quickly while also decreasing the power needed to send these instructions.

AMD also estimates that RDNA 2 GPUs will get 54% more performance-per-watt. The overall impact of AMD’s work to drastically decrease power consumption in the 6000 series cards is seen clearly in their spec sheets.

The first card revealed, RX 6800 XT, is a mid-range powerhouse of a card with 16GB of GDDR6, 128 MB of Inifinity Cache, and a max clock speed of 2250MHz. What’s more impressive is that this card goes toe-to-toe with Nvidia’s RTX 3080 in many games.

The less powerful version, RX 6800, features the same amount of cache and GDDR6 VRAM as its big brother with a slightly lower base (1815Mhz) and boost clock (2105MHz). But with those decreases also comes a hefty decrease in the power required (250 Watts) and price ($579)

And for those looking for an absolute beast in a small package, the RX 6900 XT appears to be that card. AMD claims that it will have similar gaming performance to the RTX 3090 with less power consumption and in a smaller form factor.

This card has the same clock speeds and VRAM as the RX 6800 XT, but the increase in compute units gives it that extra computing power that it needs to be on the same level as the 3090.

So far, all of the Big Navi benchmarks appear to place AMD’s latest offerings on equal footing with Nvidia while using generally less power at very competitive prices.