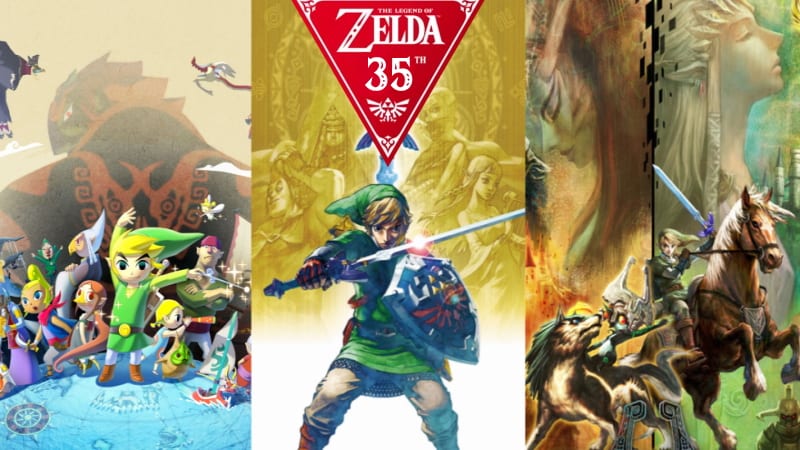 With the 35th anniversary of the Legend of Zelda happening next year in 2021, we can’t help but wonder if this series will get the same treatment that Mario is receiving right now. The franchise is so massive that there are plenty of ways Nintendo can celebrate the anniversary.

Here are the announcements Nintendo could make next year for Zelda’s anniversary that would be just as good as, if not better than, Mario’s anniversary reveals.

Of course, any Zelda collection would be a top pick on an anniversary wishlist.

The last time we saw a Zelda compilation game was back in 2003 with The Legend of Zelda: Collector’s Edition for the GameCube. It included the original Legend of Zelda, Zelda II: The Adventure of Link, Ocarina of Time, Majora’s Mask, and a 20-minute demo of Wind Waker.

There are a few different ways Nintendo could handle a 3D Zelda collection in 2021.

They could create two separate collections. The first could include Ocarina of Time 3D, Ocarina of Time: Master Quest, and Majora’s Mask 3D, all ports of the original Nintendo 64 games using their 3DS remasters.

The second collection could include Wind Waker HD and Twilight Princess HD, ports of the original GameCube games using their Wii U remasters.

It would be an extra bonus to get all four of these games in a single collection, whether they used their original releases or their more recent remasters. In any case, it would be great to be able to play them all on in a single place because they represent the best of the Zelda series.

If you were wondering why we didn’t include Skyward Sword in any of the 3D collections above, it’s because, well… the game needs a bit of work. Unlike the other 3D Zeldas, it’s never been remade or remastered, and a simple port wouldn’t be quite as easy.

Skyward Sword desperately needs the remaster treatment. It’s been talked about to death already, but there are a number of quality of life improvements the game could receive in order to really shine.

Some changes to the game that would go a long way would be fewer interruptions from Fi, the ability to fast travel to any bird statue, and improvements to flying in the sky mechanics.

Just like how Super Mario 3D World is getting its own remaster instead of being part of a collection, Skyward Sword could get the same treatment. Throw a bit of extra content in it and boom, you’ve got the next Zelda remake for 2021.

Four Swords and Four Swords Adventures are pretty difficult to play in 2020, and it’s about time Nintendo made them more accessible for fans.

Four Swords was released first on the Game Boy Advance in 2002 on the same cartridge as A Link to the Past, and it was multiplayer only, so it was hard to play unless you had some friends and a link cable. It rereleased briefly on the DSiWare service in 2011.

Four Swords Adventures is a different game that released on the GameCube in 2004 and hasn’t seen an additional release since then. Unlike Four Swords, FSA could be played single-player, but supported up to four players on a console.

This could be a great game for Nintendo to offer for Nintendo Switch Online subscribers to play with the addition of a multiplayer mode. Just imagine teaming up with your friends online to take down bosses and dungeon puzzles together. It would be like Triforce Heroes but…better.

Many people have forgotten that Capcom developed three Zelda games: The Minish Cap, Oracle of Seasons, and Oracle of Ages. Sure, they could be given the remake treatment that Link’s Awakening got, and that would be great, but, a collection is another idea.

The games have aged remarkably well, and they could be put into a single collection with minor visual and audio touch-ups similar to how Super Mario All-Stars for the SNES online service is getting.

Or better yet, is it too much to ask for the third Oracle game that was supposed to be developed alongside the other two? …probably. We’ll just take a Capcom collection for now, please.

New amiibo and Other Merchandise

For the 30th anniversary, we got special Link and Zelda amiibo. But there are a ton of characters that still don’t have amiibo figures; if they paired it with a rerelease of a game, we could get amiibo of characters like Ghirahim, Groose, Impa, Tetra, and more.

Let’s get some Zelda LEGO sets, too. They could be interactive like the Mario ones or more intricate designs like a Hyrule Castle set.

Give me new Zelda clothes, posters, books, keychains, statues, coins, and other trinkets that I can display on my shelf. I’ll throw the money at you, Nintendo, just give me all the Zelda merchandise you can think of.

Collaborations With Other Games

Mario’s influence is leaking into other games through collaborations with Splatoon and Animal Crossing. It would be great to see that happen with Zelda, too.

Because Splatfests still somehow aren’t over, let’s get a Zelda-themed one next year. Maybe we could wage turf wars over which type of Zelda game we like better, 2D or 3D. Perhaps they’ll make us decide if we’d rather hold the Triforce of Wisdom or the Triforce of Power.

Let’s get Zelda items in Animal Crossing: New Horizons. There were already items from the series in New Leaf, so let’s bring them back. I want to display the Master Sword and the Triforce in my house. Bring back Wolf Link, Epona, and Ganon as villagers while we’re at it.

A Zelda dungeon maker similar to Super Mario Maker is my absolute dream game. I could write a thousand words on this topic alone.

It makes so much sense. Let users design their own dungeons using assets from the top-down games such as The Legend of Zelda, a Link to the Past, Link’s Awakening, and a Link Between Worlds and be able to share them with the world.

After seeing the amazing creations that came out of Super Mario Maker, it seems like the next logical step for Zelda to follow in its footsteps. It would be incredible to see what the community could design.

Sure, we had the dungeon designer in the Link’s Awakening remake, but it was far too limited. You could only use existing dungeon rooms without customizing them, and you couldn’t even share your creations online.

Maybe it was testing the waters for something bigger and better.

Breath of the Wild Sequel Release

At the time of writing this, it’s been 450 days since we saw the trailer teasing Breath of the Wild’s sequel. Since then, we haven’t heard a single word about the game’s progress.

We all knew it would take some time for a game of Breath of the Wild’s magnitude to see a release date, but 2021 feels like the right time for it to finally come.

Since we haven’t heard anything about it lately, it’s unlikely the game would be released in the first half of the year. It would make a lot of sense for it to arrive at the end of the year, though, in time for the holidays.

The Breath of the Wild sequel would be the perfect cherry on top to the end of the Zelda 35th anniversary year.

I know you’ve all been waiting for this one. What we want most of all is a 1993 Zelda collection with the games from the Phillips CD-i, including Link: The Faces of Evil, Zelda: The Wand of Gamelon, and Zelda’s Adventure.

Wait, you guys don’t want this? Okay, maybe not…