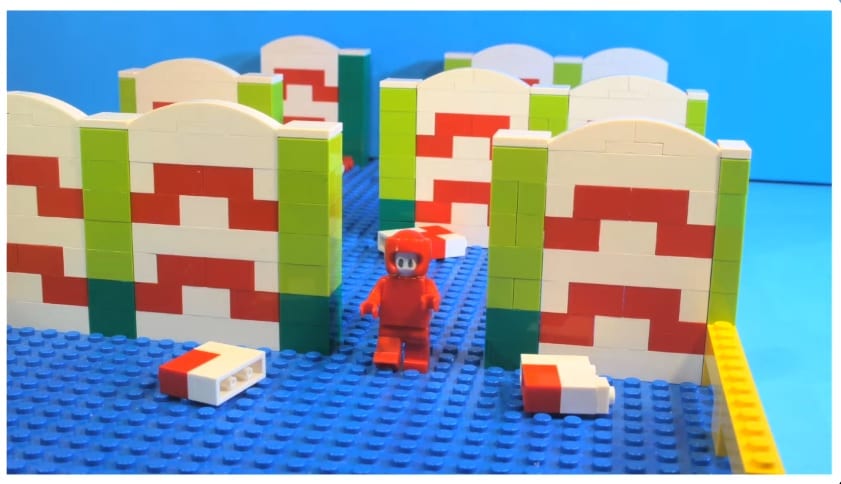 There seems to be no limit to the creativity we see in the gaming community. YouTuber TheJumiFilm specializes in creating Lego stop motion videos, and his latest creation is an impressive Fall Guys: Ultimate Knockout animation.

TheJumiFilm says that it took him three whole weeks of building, animating, and editing the video before it was finally finished and posted for the world to see. The animation is so smooth and of high quality that it hardly even looks like stop motion at all.

The stop motion video even uses music and sound effects from the game, so it truly feels like it could be straight out of Fall Guys if the characters and stage weren’t made out of actual brick Legos.

The animation is about two minutes long and starts with a pig Lego character falling through the air on the populating screen as he waits to join a Fall Guys game.

It then cuts to eight Lego characters hurdling their way through the Door Dash stage of Fall Guys. The camera follows the pig character as he tries to knock down doors and reach the finish line in order to qualify for the next round.

After the pig character attempts (and fails) to break down the wrong door, we see two other characters pull ahead of him with only one qualifying spot left.

Does the pig character qualify for the next round? You’ll have to watch the video below and find out.

TheJumiFilm has an entire YouTube channel with stop motion Lego animations, but this is his first Fall Guys themed video. He says that he’s planning on making two more Fall Guys Lego stop motion videos later this year after he finishes one for the game Among Us.

His work has even gained the attention of the Fall Guys official Twitter account. They retweeted TheJumiFilm’s video along with the comment “If this isn’t worthy of a retweet, I don’t know what is.” The animation is absolutely worth recognition from the official account.

You can watch the full Fall Guys Lego stop motion video below. As we wait for Fall Guys season two to begin, you can check out other original content that fans have created, such as fan-made skins for the game.