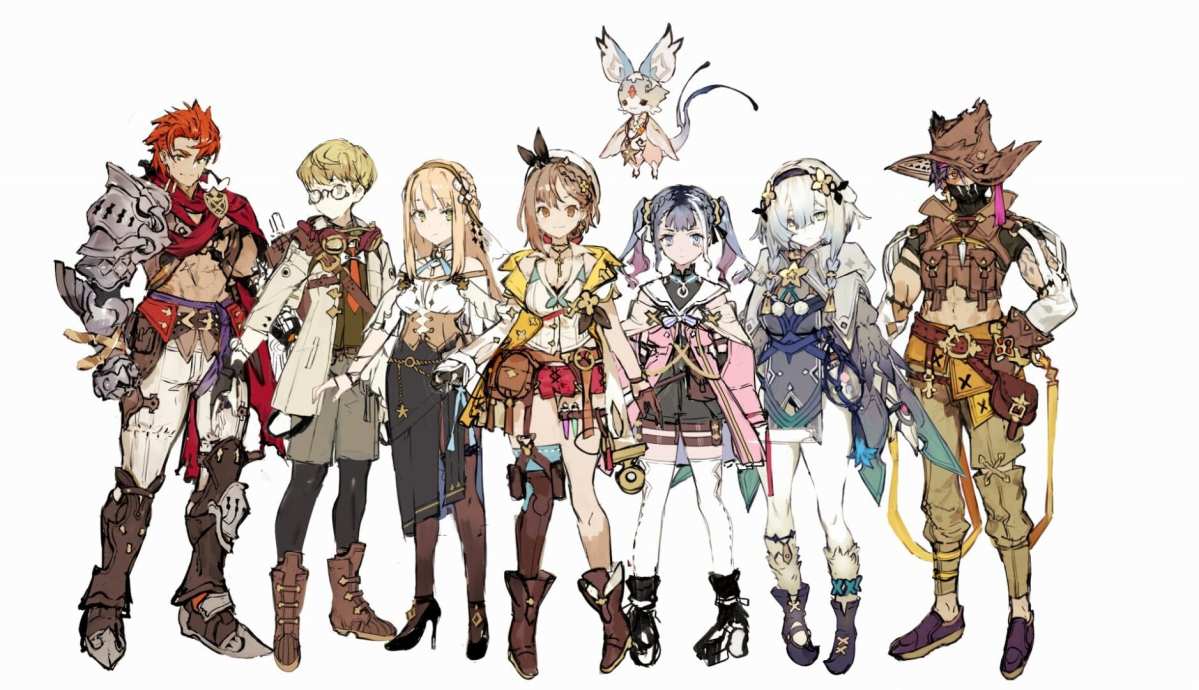 One of the best aspects of Atelier Ryza 2: Lost Legends & the Secret Fairy is its art, and today you get to see how the characters were designed.

The Japanese website 4Gamer published an interview to character designer Toridamono and producer Junzo Hosoi, and we get the reveal of many sketches that resulted into the final looks of the characters that we have seen.

You can check the beautiful art in the gallery below.

We learn that Tao was the first Atelier Ryza 2 character to be designed because Toridamono found designing Ryza challenging. He was asking to make him handsom, and this provided additional challenge because he’s more suited to draw cute girls and rougher guys.

Klaudia was the second character to be designed, and the idea was to give her the look of a young lady who has inherited the family business and is working.

Since she has sexy legs in the previous game, Toridamono-san wanted to draw an outfit that showcased them. Yet, Hosoi-san decided that the first design showed them too much, making her feel too youthful. Ultimately, they settled for a slit skirt taking inspiration from Chinese dresses after going to a restaurant together and seeing a waitress wearing one.

A lot of trial and error also went into designing her hairstyle, but in the end it was decided to keep her image similar to the previous game.

Patty was designed to have the image of a city girl in contrast with the country girl Ryza. That means that finishing her design had to be postponed until Ryza herself was done, so she ended up being completed last.

Serri initially had her look inspired by Red Riding Hood and even had a red cape to match. That being said, the Oren tribe enjoys pale colors, so this was changed. When the design was turned into a 3D model, her backside was a bit too prominent, so a cape was added to cover it a bit.

Clifford was the most challenging among the new characters, so there are many sketches of him. The first draft looked handsome, but he did not look like a treasure hunter, so it was discarded.

Toridamono then added many decorations to his costume because he found his silhouette uninteresting and wanted him to look like someone coming from a different cultural background compared to the rest.

Lent’s new image was initially inspired by kabuki and samurai due to having traveled much and having come into contact with different cultures. Yet, it looked too much like a MMORPG character who leveled up and it was dropped.

Toridamono wanted to give him the look of a wanderer, so his new look is a little wild. Yet, he found his silhouette a bit uninteresting, which resulted in the addition of the red cape.

The initial idea for Ryza was a young lady about the age of a college student dressing up to move into the city. Toridamono didn’t want to make big changes to her original design since so many loved her and he didn’t want to make her less recognizable.

Yet, the outfit of the first design actually ended up being too similar to the previous game, and that wasn’t acceptable either, since everyone else had grown up. That’s why she was set aside and most of the rest of the cast was designed before she did.

Her image was strongly tied to wearing a hat, so there was trial and error in its design. Yet, Ryza is a simple girl who cherishes what she owns, so in the end the it was designed to have her keep her old hat.

Toridamono wanted to give her an adult look by changing her hairstyle so that her ears would show. In the end he decided to have only one ear showing.

Her clothes were another channel. Toridamono had decided on her wearing a shirt, but he couldn’t easily decide on what to wear over it, so that took a lot of sketches. He believed something that looked a bit like a trench coat would enhance her adult look, but Hosoi-san wasn’t convinced because it wouldn’t have been right for the season. Yet, Toridamono looked for a design of a trench coat for the summer. That being said, Ryza’s left arm isn’t into her sleeve but passes through a hole in the shoulder. The sleeve itself is tied to her back.

As for the accessories, Ryza wouldn’t pierce her ears, so she wears ear cuffs, and her necklace is of course important, so she would never leave it behind.

Attached to her left thigh we can see a perfume bottle. Since she’s older, this represents her having matured. Many color patterns were attempted, but in the end Toridamono decided to stick with the original palette.

Japan will get Atelier Ryza 2: Lost Legends & the Secret Fairy on PS4 and Switch on December 3 and PC in January 2021. The western release has already been confirmed but for now, it’s slated for a generic “winter.”

In case you missed it, you can enjoy the original announcement and a trailer with the first gallery of screenshots, the second gallery of images,  more character art, and the latest screenshots.