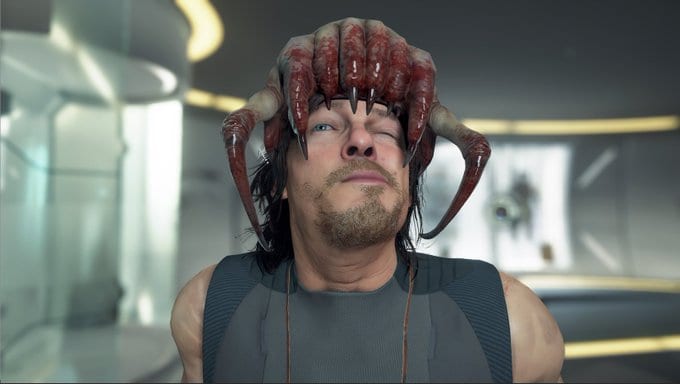 Earlier this month, Hideo Kojima shocked everyone with a surprise Death Stranding PC version announcement. In general, the reveal was welcome, but this news was especially appreciated because the announcement trailer featured teasers of special Half-Life-themed equipment. Apparently, they aren’t mere cosmetics.

Recently, Kojima took to Twitter to drop quite the bombshell. The special Headcrab hat at the end of the Death Stranding trailer is a “collaboration item” with a “special feature.” Moreover, it isn’t the only collab item; apparently, the gloves at the trailer’s 0:05 mark are the Gravity Gloves from Half-Life Alyx, and they too have unique attributes.

Of course, being the secretive man that he is (and we love him for it), Kojima didn’t mention what powers these special items bestow. Death Stranding’s pre-order page doesn’t offer any hints either, let alone mention the existence of the items. However, that hasn’t stopped Twitter commenters from speculating.

The prevailing theory is: the Gravity Gloves will let players grab items from afar, but so far everyone is stumped on the Headcrab hat. With any luck, though, it won’t turn Norman Reedus…er, I mean Sam Bridges…into a backwards-speaking zombie that begs for death.

When our Zhiqing Wan reviewed the original PlayStation 4 version of Death Stranding, she loved the game, citing near-perfect actor performances and fetch quests that were fun (usually, fetch quests are the bane of gamers’ experiences). Since the PC port will include new features such as a photo mode and ultra-wide monitor support, it might just be the definitive walking simulator experience.

Death Stranding is scheduled to release on PCs June 2nd. The game will be available on Steam and the Epic Games Store. If you pre-order the game, you will receive special gold and silver armor, sunglasses, and power skeletons that can be unlocked through story progression.