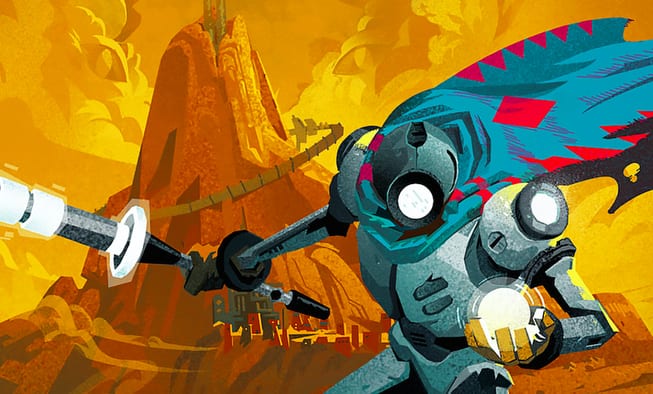 Creature in the Well has received a much-deserved accolades trailer, and its developers paired the trailer with a big announcement for PlayStation 4 owners.

Streamed on Mar. 16 via the game’s developer, Flight School Studio’s, official YouTube account, the trailer shows off all of the praise the game has received both before and since its release on Sept. 6, 2019.

The accolades are set against footage of the game. The player character can be seen running through ruins, smashing projectiles back and forth like a game of pinball, and taking on fiendish contraptions with a style and flair all their own.

All the while, beautiful and haunting vistas of deserts, abandoned facilities and the like can be seen all around the player, setting an atmosphere of a world long abandoned by those that once inhabited it.

However, the real draw of the trailer comes at the end. Following the accolades and sizzle reel of gameplay action, it is revealed that the game will receive an official release on PlayStation 4 on Mar. 31.

It’s a nice reveal, and great news for anyone who was interested in the game but only had a PS4 as their current-gen gaming hardware upon its release. The full trailer can be viewed down below.

Originally released on the Nintendo Switch, Xbox One and PC, Creature in the Well sees players take up the role of the last BOT-C unit in the world, tasked with restoring power to a mountain facility inhabited by an unknown creature.

To do so, they’ll need to bash, smash and crash their way through a number of obstacles, smacking projectiles back and forth through a top-down mixture of dungeon-crawling and pinball.

It’s a novel concept to say the least, and it offers up a strange mix of gameplay that ends up meshing well together. Or at least, that’s how we felt about it when we played through the game ourselves during its initial launch.

For our full thoughts on the game, you can find our full review here.