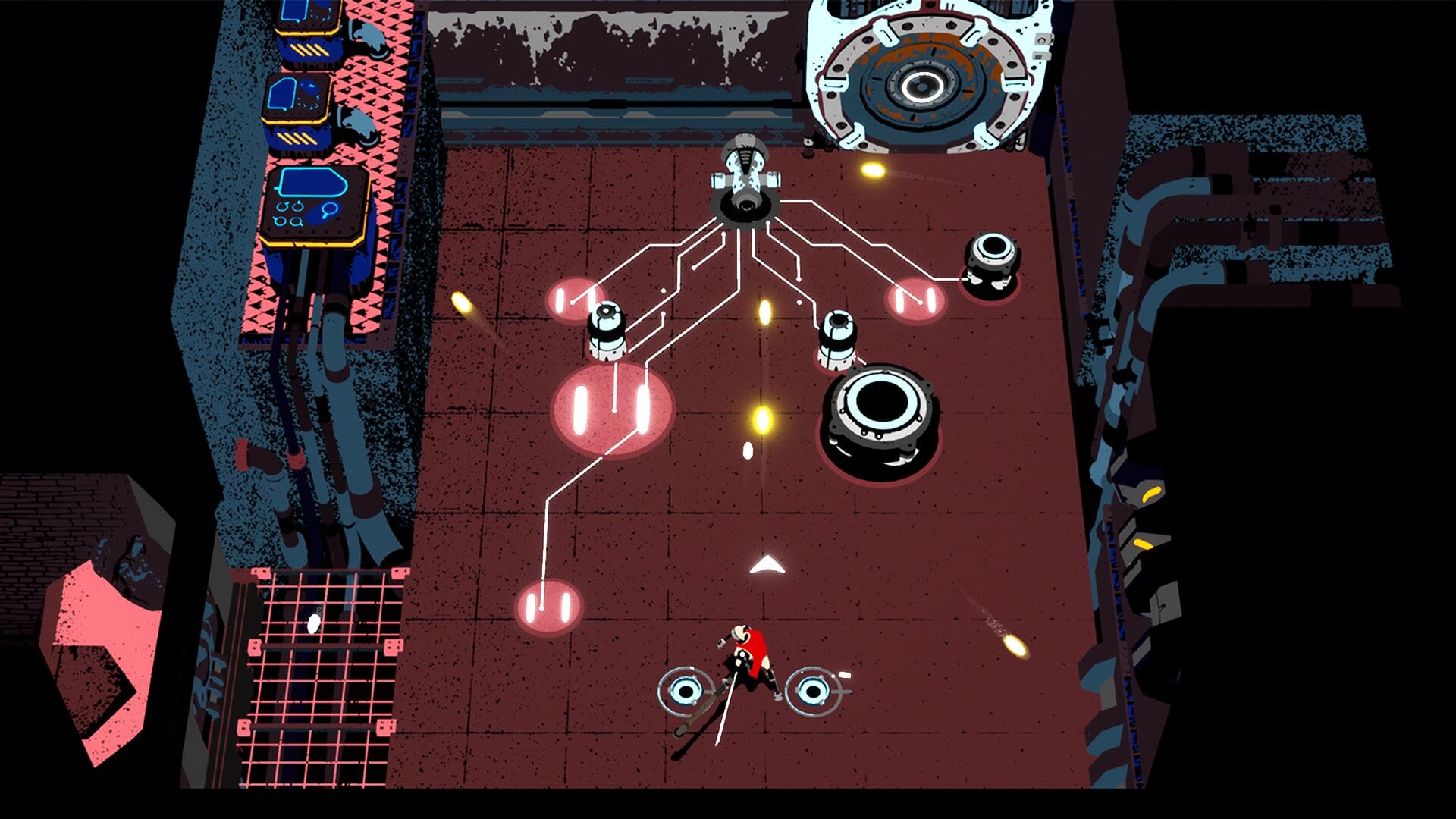 Creature in the Well on Nintendo Switch

Flight School’s Creature in the Well is a curious mix familiar gameplay features. It’s being sold as a pinball inspired dungeon crawler, but there’s more to it than that.

At one point or another in your journey to overcome the titular creature, you’ll feel like you’re playing a roguelike, bullet-hell shooter, or even an old Zelda game, and it all comes together to create something unique.

As you embark on the quest to turn on the old weather machine inside a mountain to save a town that has been swept up in a sandstorm, it becomes pretty clear that everything you do centres around a simple pinball mechanic.

In each of the eight sectors of the mountain’s machine, each one being differentiated by a slight color change and the introduction of new room types, you work your way through multiple rooms to face the creature in a battle to turn on the sector’s inner workings.

To get through each room, you need to hit glowing balls into pinball bumpers, getting a currency called Power from each hit. It’s a simple idea.

You can bat the rebounding orbs back with one of your weapons, or swing the other to draw the balls in before unleashing a more powerful strike.

Using both, you need to fill in a bar on every bumper in the room to either earn enough Power to open the next door or to engage a central core that sucks in all the nearby orbs to rack up a huge amount of Power for you to move on with.

Some rooms are for grinding, with you sending off orbs to satisfyingly rebound furiously between loads of bumpers, while some throw enemies and turrets at you, and others are more puzzle based, asking you to be precise with where you’re standing when you unleash a shot or fill up a sequence bumpers in a matter of seconds.

Just hitting the balls is a lot of fun, especially when you master the ability to absorb multiple balls at a time, and the moments in which you begin to fill up a room’s big central bumper is incredibly satisfying. The basic loop grabbed me early on and I struggled to put it down.

Each sector’s rooms keep switching up the theme too. As you progress, earning Power and opening doors, you’ll face simple rooms, rooms that fill the floor with seemingly inescapable lasers and mines that you can set off if you’re not careful, and others that require agile use of the dash button.

Some rooms take the focus away from pinball, ensuring that your eyes are focused on scuttling, drone like enemies that are easy to destroy but difficult to evade. You’ll be frantically dashing into small spaces to be safe for just long enough to charge up a shot, before having to move again.

It often demands concentration, agility, and precision in the same way the most stressful bullet hell titles do, and those rooms are a great example of Creature in the Well using its central mechanic in a way that adds variety without confusing you.

Since the aim of most rooms is to just earn the Power required to progress though, there’s a great sense of freedom given to progression.

Creature in the Well can be tough, punishingly and frustratingly at times, but you don’t always have to persevere.

You have a few options when faced with a room you’re struggling with. You can simply skip it if you already have the Power needed to open the door, you can stick with it until you’ve mastered what’s needed, or you can head back to a previous room to grind for power without having to tackle something you don’t feel ready for.

That freedom to choose not only makes Creature in the Well’s journey feel like one you’re in control of, but it does a lot to minimize the frustration that could otherwise feel unfair.

The sector layout, in terms of challenge, isn’t always the best, often separating an easy room and an almost impossible with just a small corridor.

It makes a lot of the larger themed sectors feel like collection of ideas than a dungeon that’s delving deeper into the mountain, but Creature in the Well does do a few things to limit the frustration of that.

Also, at times, you’ll come across rooms that feel almost impossible, whether that be due to being overwhelmed by floating enemies or time constraints you can’t even get close to, and failing is made all the more frustrating by the fact that each time you die the creature grabs you and throws you out of the well in the town.

Every time you die, you start from the beginning of the sector again, and even have to make your way to the mountain’s entrance again, making you not want to waste time retrying rooms.

Aside from a room in which you can unlock upgrades in ten times throughout the game, if you find the Cores needed, there’s nothing interesting to do in the town, and no progress is actually reset inside the sector, so throwing you back to the beginning feels unnecessarily cruel.

I think down to personal taste than quality, but Creature in the Well’s art style didn’t make me want to stop and take in the sights either.

The comic book style is well done and it looks suitably run down, with bright color contrasting crumbling bridges and decaying floor, as you’d expect from the home of a long dormant machine and mysterious creature, but a lack of lighting effects or flair means that all the atmosphere has to be built by the music.

While the repetition is generally a non-issue in the basic rooms, as you can often bypass them, it gets annoying once you reach the boss fight of sorts at the end of each sector.

The creature will force you to battle through three or four levels to reach the machine deeper in the mountain, throwing the game’s hardest moments at you each time. Here, I was often charing up balls, launching them at a bumper, and dashing at a speed I didn’t think I had in me.

These sections can’t be bypassed though, forcing you to beat them to progress and throwing you back to the town each time you fail. The sixth and seventh boss rooms almost made me give up, but it was due to the time wasting more than the sheer difficulty.

However, that all ties into what might be my favorite aspect of Creature in the Well. Risk and reward is tied in progression and exploration masterfully.

Yes, you’ll feel useless at times, but there’s no need to fret too much. As you upgrade your robotic character with orbs you find, you get stronger and can unleash orbs with more energy.

If you are faced with a difficult room, there’s usually another sector to try your hand at or another path to explore, often giving you the power to return to previous troubles only to find them to be a walk in the park.

The tricky rooms often house new tools that do things like extend your range when catching active balls or create a chain reaction between bumpers, or the upgrade orbs, allowing you to improve.

I struggled late in the game, returned to rooms I had problems with early on, and found that I’d got powerful enough naturally that they were no longer difficult, opening up secrets that made me even stronger, allowing me to return to the late game struggles with more confidence and power.

Creature in the Well’s progression is quite subtle, but it’s very well designed and tied wonderfully into the world.

The only issue that arose from that was that the final fight was arguably the easiest in the game. Just when I felt the most powerful, the game let up, which was a little disappointing.

While Creature in the Well’s premise is simple, there’s a lot to get to grips with. Not only will you be faced with bullet hell moments, intricate puzzles, and secrets to find as you progress, but you also need to learn how to manage the game’s difficulty.

It’s tough at times, there no denying that, but figuring out how to use each sector’s layout to your advantage will soon make you appreciate the subtly implemented progression system and impeccably designed rooms, adding to the pinball hack and slash gameplay that feels fantastic in all its forms from the moment you step foot in the mountain.

Should You Buy Creature in the Well?

If you’re a fan of dungeon crawlers, hack and slash games, or even pinball, yes you should.

Creature in the Well Platforms and Release Date

Creature in the Well is out on PC, Nintendo Switch, and Xbox One on Sept. 6. It is on Xbox Game Pass too.

Creature in the Well Developer

Creature in the Well is developed by Flight School, who previously developed Island Time VR.