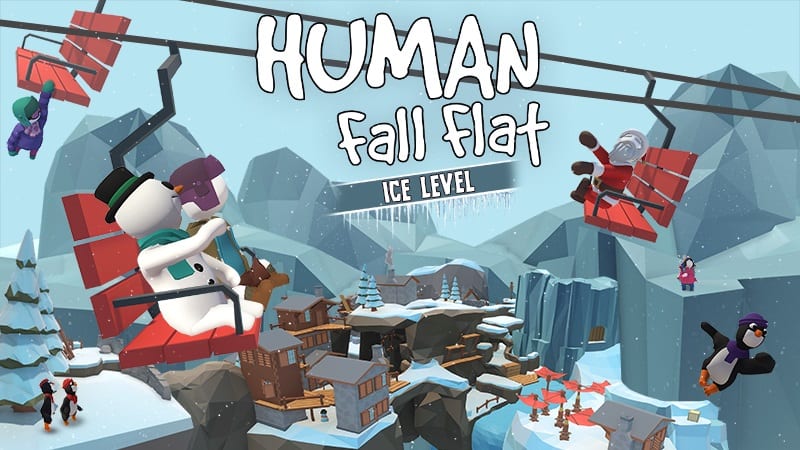 As much as no one ever wants summer to end, winter is upon us and Human: Fall Flat has new DLC to transition us into the chilly season. Announced in a tweet by Major Nelson, Human: Fall Flat’s Ice Level is available starting today.

Human: Fall Flat is a game where you lead a white, stumbling blob of a human through puzzling, gravity-obedient worlds. The titular humans start off as white, amorphous blobs similar to Flubber, but can be customized into actually resembling humans. These same humans have incredible grip strength and climbing ability, which, with a little player ingenuity can surpass any of the numerous obstacles set by the game to trip up brave players.

Human: Fall Flat also features co-op, (two-player local and eight-player online) so you can bring your friends into the mix and fall as a group. The more people you have, the longer the potential human chain to try breaking the puzzles in ridiculous ways. Puzzles have multiple solutions so even with eight people throwing themselves at trying to get up a cliff or find a way over a treacherous gap, it won’t simply be a Lemming style line up to the finish.

Set in an “alpine resort”, the new ice level features winter themed challenges. You’ll unsurprisingly need to content with Ice in many of these new puzzles but there are also recreational winter things to goof off with, such as ski-lifts and snowboarding.

The newly released Ice Level can be purchased in a bundle with Human: Fall Flat for a discounted price of $7.49 until Nov. 21 on the Xbox Store. (This same version is available for all other platforms including PS4, Steam, and the Switch’s eShop.) Anyone who already owns Human: Fall Flat may purchase the Ice Level separately for free.

If you happen to want to hear Twinfinite’s review of Human: Fall Flat, you can find that here.