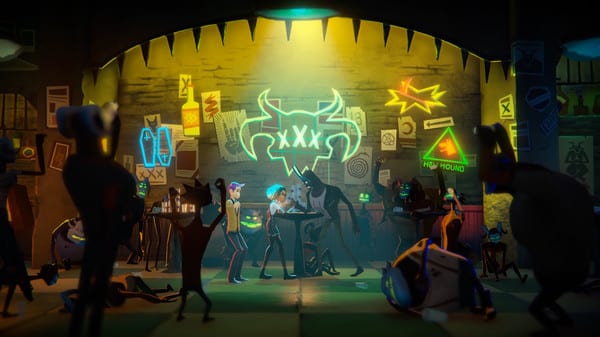 Near the final act of Afterparty, Satan reveals he’s added another loophole to the game. Instead of just competing against him, you’ll have to assemble a team to go against him and his friends. While there are plenty of choices, what better partner is there than your own personal demon. Here is everything you need to know about how to get Wormhorn on your drinking team in Afterparty.

How to Get Wormhorn on Your Drinking Team in Afterparty

After Milo and Lola have a fight and Wormhorn is humiliated by Satan, all three will split up. Who you’ll control depends on a few of the choices you’ve made.

Regardless of who you control, you’ll need to head to the Strangled Schoolyard to meet up with the character you aren’t controlling.

You’ll eventually upstairs and you’ll find your other half. After a back and forth, Lola and Milo will make up.

Before you go upstairs, though, you’ll need to approach Wormhorn at the very right of the bar, as she is attempting to learn how to play blood pong. If you don’t talk to her before going upstairs, you won’t be able to recruit her.

Talk to Wormhorn cordially – not aggressively – and ask her if she wants to play a game of blood pong.

Regardless of whether you beat her or not, she’ll be much happier than she was before.

Leave the bar and head over to Sam and you’ll be on your way to Satan’s competition.

In the Taxi, you’ll find the two other characters you want on your drinking team. You can pick whoever you want for the first slot, but be sure you leave a spot on the team open for Wormhorn.

She is usually going to be your fourth option or so when picking, so keep that in mind when rounding out your team of four.

To summarize, you’ll need to do the following to get Wormhorn on your drinking team in Afterparty:

If you’re still on the lookout for other drinking tips and tricks, be sure to search Twinfinite for all of your Afterparty guides.