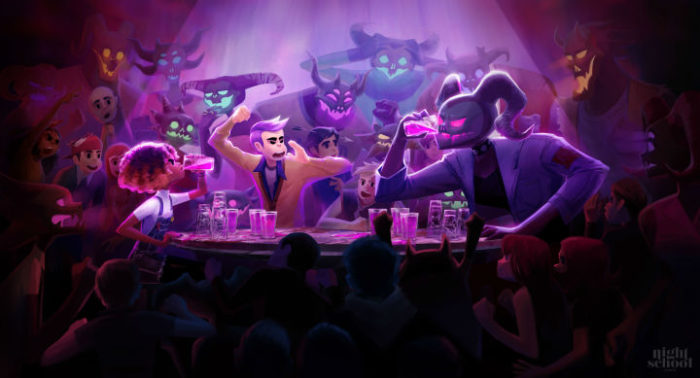 At PAX East recently, we had the opportunity to demo After Party, the anticipated next game from Night School Studio, the group of developers behind the acclaimed Oxenfree. It was Twinfinite’s pick for the best indie game of 2016 in a year that was stacked with great indie games, so of course we’re super interested in seeing how After Party is shaping up.

In addition to playing through the PAX East demo, we also chatted with Night School Studio co-founder and studio director, Sean Krankel, about some of the major differences between After Party, and Oxenfree.

These are two games might look somewhat similar aesthetically to the casual observer, and are made by some of the same people, but outside of that, appear to be very different experiences.

Ed McGlone, Editor-in-Chief of Twinfinite: Can you talk about the inspiration behind After Party? It appears to be a totally different setting and experience from your first game, Oxenfree.

Sean Krankel, Studio Director of Night School Studio : Yes! So after Oxenfree, which is a pretty serious game, we wanted to kind of lighten it up a bit, but we didn’t know what game we were going to make at first. We just thought it’d be fun to do something that had a little bit of comedy in it.

And so at the same time we’ve been trying to figure out a smaller setting for a game too. So instead of something large, we’re looking at Papers, Please and other games that were very efficient. And we started looking at a bar as a setting for a game. In the beginning, we’re actually going to make it like a bartending game. It wasn’t going to be this pub crawl.

Then, as things do… the scale kept growing and like, you know what, I don’t want to sit in a bar, I want to go party, I want to go to a pub crawl, I want to be out with the people that are out drinking. And so that grew into this idea of like a wild pub crawl, but the Hell thing still took while; we just knew we wanted to be drinking, we wanted to make drinking a mechanic that could augment our dialogue system and a thing that would add to our design philosophy.

And one day, Adam my co-founder and I were walking through the graveyard that’s across the street from our office, and as we’re brainstorming, which is very weird place to brainstorm [laughs], and as a joke we like you know what it’d be good to outdrink Satan, and they’re ehh’ like that’s stupid.

And a week later it’s like you know what… that kind of feels good! And so the two just sort of inspired each other as they went. Like from a design point of view, we like the idea of this this very modular story that you could encounter, like a real pub crawl in any order you want, which is very different from Oxenfree. And from a story perspective, we were like we can make our own Hell, how cool is that?!

Like not the red, heavy metal, pitchfork fire Hell… like mix all these religions and cultures together. And so it just kind of kept evolving and became what you see today.

Ed: So the drinking mechanic… it appears to be a really big and important part of the game. What kind of details can you share about how it will influence the narrative? It seems similar to how the radios worked in Oxenfree, where they made up the main bulk of the gameplay.

Krankel: We wanted drinking to be sort of be similar to the radio, like a layer over everything that you do in the game. So the same way that in Oxenfree you can use the radio to be tuning into quest specific objectives or open up portals; it’s sort of multi-purpose tool. In After Party, the drinking functions like sort of a boozy layer over all of our systems.

So for dialogue, we want you to be able to customize how your dialogue choices are going to appear, which is really more of a role-playing thing.

The drinking is not like a lock-and-key type of a system, it’s more if I enter this bar and I want to be flirty, or aggressive, or funny, or there’s one shot you can do that makes you vomit your conscience up and it’s a little character of you that runs away.

We want the player to be able to sort of choose how they will [respond]. The script is way bigger than Oxenfree because of that. And every bar has like five or six drinks.

Ed: So one of the major things people really enjoyed about Oxenfree is that you can play through multiple times and see different tweaks to the story that keen players can pick up on. It seems like the drinking mechanic will be the way players can experience different dialogues and conversations then.

Krankel: Yeah you can really sort of role play in different styles in each environment. But also, on your first playthrough, you’re just going to miss a lot of the content, because it’s not just what you say, but it’s also about where you’re at.

So if you call me up and you’re like: Hey it’s 11 o’clock and there’s a party going on over at this bar, but on another island in the game, and I have to choose where I go, I’m going to miss all that content. That was there.

Krankel: Yeah. Absolutely. In Oxenfree it was a very linear story, but the player could really push and pull at how their character finishes the story via dialogue. In [After Party] it’s actually not a linear story. It’s pretty modular where you choose what you do, where you go, and when, and you will inherently end up missing some stuff on that first playthrough.

Ed: Is the ultimate goal to get to Satan? The final boss basically?

Krankel: When the game starts, that is what the player thinks, certainly. The game really feels just about that immediate goal in front of your face: How the hell do we get out of here? Right?

But, as the game goes on, both of our player characters, because you play as two people in this one, their friendship gets tested a lot and the things that make their friendship over the last 15-20 years also kind of get pushed and pulled at.

And so by mid game you might even want to stay in Hell, and make friends with people there. So I think there’s a lot of layers that people are going to be surprised with, because we only talk about it usually as like – this is just a crazy romp through Hell – but it’s really more about their friendship and how a long-term friendship with somebody can be really challenging.

Ed: What are some things in After Party that Oxenfree players will find familiar? And what will they find is very different?

Krankel: Yeah, I think on the different front it’s wearing it on its sleeve, which is the over-the-top comedy. Like we’re really trying to make this thing feel more like an Adult Swim show. Like if you’re watching Rick and Morty, or BoJack Horseman, even The Simpsons, like we’re trying to have that sort of mature comedy.

But I think underneath that there is a lot of the same part that was an Oxenfree in terms of how our characters interact, and where the story goes. So, you know, if you think about Oxenfree, we never talked about it as a game about loss and morning, but honestly that is a lot of what that game is about.

The same way here. There’s a lot about their past and their history that you haven’t even seen in the demo, but that gets sort of teased out. And so I think a player of Oxenfree will absolutely see the same DNA in this, but the world and the comedy and just the scope of this game it’s a very different much bigger experience.