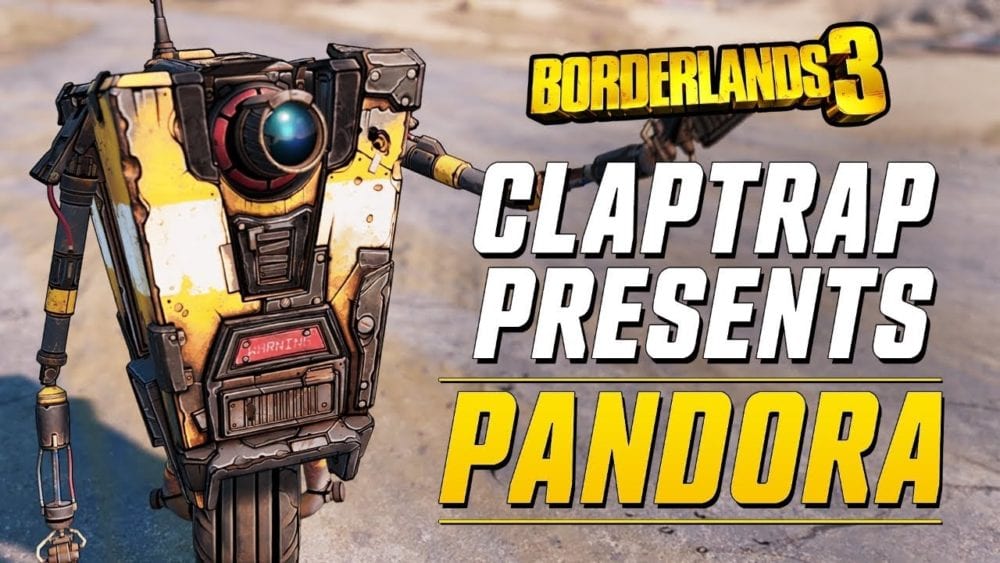 A new video series from Gearbox kicked off today. Called Claptrap presents, they’re to provide a bit of story context to various locations in the upcoming game, all presented and narrated by the instantly recognizable and goofy robot Claptrap. He’s joined by Steve, who players will remember as the ever-present NPC who likes to yell “Heyo!” The first video presents Pandora, a familiar location for Borderlands fans.

Join Claptrap and Steve on an awe-inspiring journey across the wilds of Pandora as they search for nature’s most beautiful spitting and/or barfing creatures. #Borderlands3,” the developer said in a Tweet earlier today, while also providing a link to a new web page on the matter.

It describes Pandora for those that don’t have time to listen to Claptrap:

“A barely-habitable rock that the Children of the Vault have made their homeworld,” Gearbox Software said about Pandora in a new landing page for the world. “Pandora’s searing-hot deserts, vicious wildlife, and burgeoning bandit population have proved too much for all who have tried to tame the planet and exploit its resources.

The ruins of Dahl, Atlas, and Hyperion facilities litter the landscape, inhabited by all manner of Skags, Rakk, Varkids, and Spiderants that are intent on eating and killing you. Usually in that order.”

We’d encourage you to check out the below video, though, as there’s some good footage of Pandora’s various flaura and fauna, as well as points of interest you’ll likely recognize from the first two games.

Presumably, we can look forward to a glimpse of other worlds and locations to feature in Borderlands 3 moving forward.

Borderlands 3 launches later this year, Sept. 13, on PS4, Xbox One, and PC. For any PS4 players that either haven’t played the first two games or are keen to try them, Sony has just announced the Borderlands: The Handsome Collection as a new PS Now game.

For our impressions on the upcoming sequel, check out Twinfinite’s hands-on preview from E3 2019.