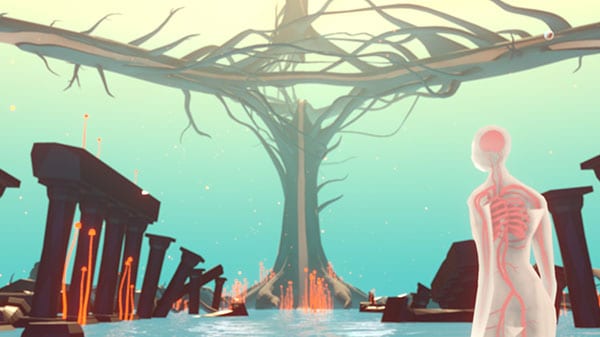 Surreal gravity-puzzle game Etherborn launched today across all platforms. To celebrate the release, the developer behind the game Altered Matter has released a gorgeous launch trailer alongside it.

Up until now Etherborn as proven to be quite mysterious, as we’ve heard little about it since the announcement trailer of last Summer. The game piqued a lot of interest at that time for its breathtaking visuals and trippy, gravity-bending puzzles.

An environmental puzzle platformer with an obscure narrative and striking art style, Etherborn is more than a little reminiscent of ustwo studio’s Monument Valley, as both center around puzzles that are navigation based.

The launch trailer depicts your character, a translucent humanoid, as they roam through ever expanding and mind-bending natural landscapes. Explorations turn the world upside down and reveal hidden paths, as a nameless voice-over tells us: “You must broaden the limits of your perception.” The trailer(which you can watch down below) also takes the time to show off the game’s soothing original soundtrack, some of which you can also check out on Altered Matter’s YouTube channel.

The game has spent a full year gathering quest interest, and even managed to pick up a plethora of awards for it’s creative design and art style. Now Etherborn is finally out – as are the reviews, most of which are glowing.

Beautiful, artsy games that involve a lot of walking around have a tendency to catch flack in some corners, but Etherborn is another of the more recent indies(Gris, notably) to buck the trend. The trailer proudly showcases the game’s already positive reception, showing quotes from reviews praising its “very beautiful world” and “brain-tickling” puzzles.

If you’re a fan of serene puzzle platformers in the same vein as Monument Valley and Gris, Etherborn is definitely worth a look. With its launch today, the game is now available to play on PC, PS4, Xbox One and Switch.