Today, during a livestream on Twitch that has just concluded, publisher Spike Chunsoft had some teases to share related to its Anime Expo attendance.

The publisher will host three panels across three different days at Anime Expo, and you can check them out at the bottom of the post.

Perhaps the most exciting reveal, is that during the first panel (on July 4 at 11:30 AM PDT) we’ll get word of three new localizations. Only one of them will be about a game coming directly from Spike Chunsoft.

The two additional announcements will be about games by Mages, known for series like Steins;Gate, Chaos;Child, Robotics;Notes, and many more.

On top of the panel on July 4, which will also involve Crystar‘s Director and Character Designer, we’ll get another one on July 5 and one on July 6, both featuring AI: The Somnium Files.

While this is just my personal speculation, I think fans of visual novels have reasons to be excited because Spike Chunsoft teased the possibility of localizing the Robotics;Notes series in the past, and that would be really, really fantastic.

Of course, we’ll have to wait a couple of weeks longer before we know for sure. My fingers are crossed. 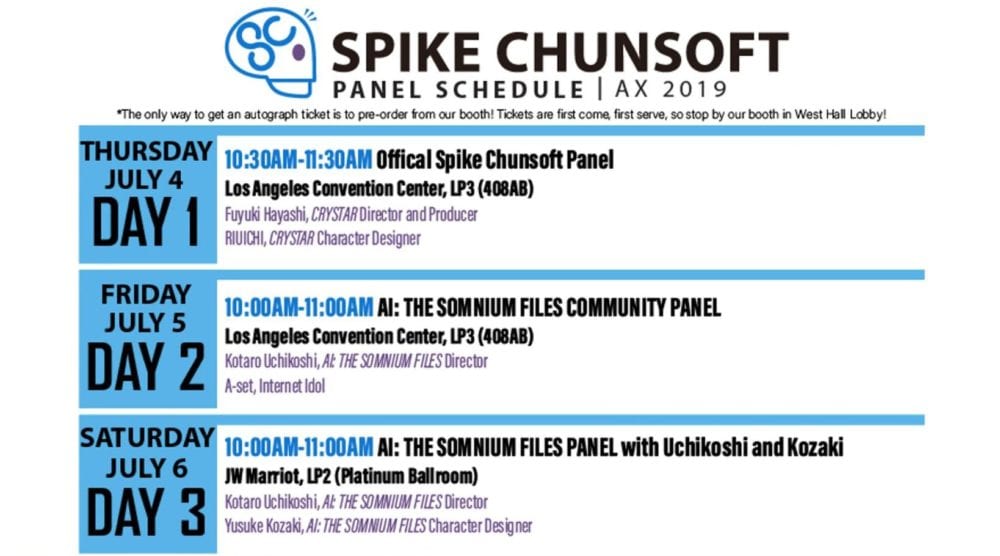