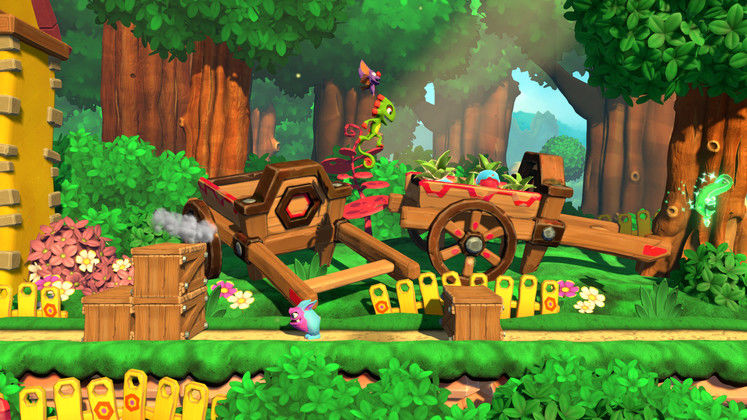 Yooka-Laylee, one of the games responsible for a 3D platforming revival of sorts, is switching things up and going 2D for their next adventure: Yooka-Laylee and the Impossible Lair.

The game is being developed by Playtonic, the team responsible for the first game that was made up of many ex-Rare members from the company’s golden age on the Nintendo 64, and is also being published by Team 17. Check out the trailer below.

It appears like many of the moves that players learned through their adventure in the first game will carry over to 2D. Instead of full-range exploration though, you’ll be using those same techniques to solve puzzles and survive more constant danger in an effort to make it to the end of each stage.

There is a 3D overworld of sorts that will also have some puzzle solving using a different overhead, isometric view point.

Finally in a bit of news that should please long time Rare fans, the game will once again feature music created by composers Grant Kirkhope and David Wise. Both of them worked on Yooka-Laylee, and have had illustrious careers in gaming and beyond.

Most notably to fans of classic Rare games, Kirkhope composed the music for both Banjo-Kazooie games, while Wise created the tracks for the original Donkey Kong Country games. A crack team indeed!

There’s no release date yet for Yooka-Laylee and the Impossible Lair other than a vague “2019.” It will be released on PlayStation 4, Nintendo Switch, Xbox One and Steam.