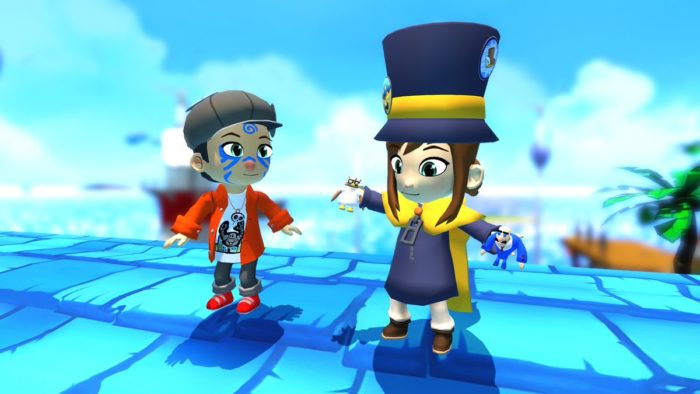 A Hat in Time on PC

My very first article for Twinfinite was a preview of A Hat in Time way back at PAX East 2014. This was back before Yooka-Laylee was a thing, and 3D platformer collect-a-thons were a dying breed of sorts. Since then, the genre has seen a bit of a revival with the aforementioned Yooka-Laylee being released and Psychonauts 2 on the horizon. I was a bit concerned that despite leading the charge in the genre’s come back, that A Hat in Time would feel overshadowed and left behind considering the high-profile competition that popped up since it began development. Not only is that not the case, A Hat in Time actually might wind up being the best of the bunch.

A Hat in Time is inspired more by the focused mission structure seen in games like the original Psychonauts rather than the totally freeform 3D platformers like Banjo-Kazooie. You begin in a hub area with one open world, Mafia Town, and as you complete chapters you’ll earn Timepieces (think Stars, and Jiggies/Pagies) which will unlock new worlds.

Although the chapters are self-contained levels of sorts, more will start opening faster than you can complete them and can be tackled in any order you wish. In other words, you’re not forced to play the game linearly if you don’t want to. You’re free to check out new worlds as you unlock them, earn some new abilities, and return to older levels.

Along those same lines, A Hat in Time is not like like Super Mario 64 where you pick a mission and can go out to get other stars that you come across but there are things to do besides your current objective. Most of the levels take place within the same area in the world you’re exploring (similar to how you start up in the same spot when you enter a world in Super Mario 64), so you can familiarize with each world and get to know its quirks.

There are usually optional collectibles that you can search for no matter what your current objective is, such as yarns to craft new hats (AKA new abilities), badges (which is kind of like a mod, or just a different ability slot of sorts) and cosmetics such as completely changing the look of Hat Girl, the game’s protagonist. The hats and badges in particular are a hit. All of them are useful throughout the game, but never overshadow the platforming in the sense that they they aren’t just gimmicks needed once or twice and that’s all. Most of the game can be completed just fine without using any of them if you really wanted to. They just enhance what Hat Girl can already do. This allows for creativity instead of forcing the player to jump through a hoop.

Speaking of which, Hat Girl is freaking adorable and so is this entire game. Hat Girl is a (mostly) silent protagonist but still expresses herself and interacts with characters in the game in age appropriate ways like blowing raspberries at them when frustrated, or putting her fingers in the shape of a gun when sneaking around like an agent. All of the main characters are filled with life and personality and some, such as the warring bird factions in chapter 2, could star in spinoff games all by themselves. They are that memorable. One moment in particular had me rolling. Hat Girl, who is just the sweetest, can initiate a game of patty cake with one of the goons of Mafia Town, who complies but ends it with punching Hat Girl right in her face and launching her across the map. Harsh, but fair considering Hat Girl spends lots of time beating on them. It’s just one of many little things players can discover while exploring.

Although A Hat in Time is undeniably cute, it isn’t a cake walk. There is a very steady pace in difficulty culminating in the game’s fourth world where your 3D platforming skills will be put to the test. It’s here where A Hat in Time both shines and frustrates most. All of the sections are well-crafted, challenging, and extremely rewarding to complete. Gameplay is varied too, with elements like stealth and time management mixed in, but it never strays too far from its heart and soul, platforming. However, unlike earlier chapters which were more forgiving, any genre appropriate issues like funky camera angles or collision/mounting problems are highlighted later on in the game, and are harshly punished with falls to your death and/or a frustrating kickback to earlier checkpoints.

Speaking of checkpoints, that is probably one of A Hat in Time’s most glaring issues. They aren’t nearly as plentiful as you’d like, and death can set you back pretty far. In open world games like Mario 64 or B-K, it’s less noticeable since it just kicks you out to an open world to try again or do something else. Instead in A Hat in Time, you’re just retreading over stuff you already did. Again, not so much a problem earlier on, but it definitely can be at least a little annoying as the game gets more difficult in its final acts.

In addition, the optional time rift levels are another opportunity to test your skills. They, like the campaign itself, slowly gear up in difficulty, and are essentially just pure platforming sections unconfined by the theme of each level. The gameplay here is incredibly smooth, crisp, and ripe for speed runs.

Factoring every thing there is to collect, A Hat in Time has a nice length to it considering the price point, and never loses steam or drags on. There is plenty to go back and collect should you plow through the main story, and collecting every Timepiece, yarn, hat, badge, relic and all of the cosmetics should keep the completionists busy long after beating the game. That said, if you were looking for a really meaty initial run through comparable to the massive collect-a-thons of years ago, that is not the case here.

A Hat in Time is an incredible effort and delivers on its promise of being a worthwhile return to the 3D collect-a-thon platformer genre. It tugs at the heartstrings and delivers all those nostalgic feels. It’s not perfect, and it probably could have been a little more ambitious with some more time or manpower, perhaps. Despite that though, A Hat in Time is one of the best 3D platformers certainly in recent times, but it can also hang with the greats from years ago as well.