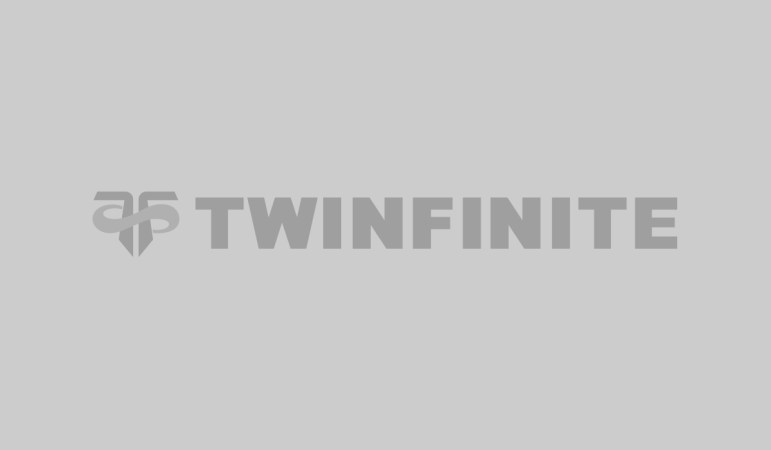 For quite some time now, the ’90s platformer seemed destined to become a forgotten genre in the industry. Video games and technology have progressed leaps and bounds since the pinnacle of the genre’s popularity, and their charming, colorful levels and collect-a-thon gameplay felt more and more dated as years passed. Playtonic Games set out to not only create a spiritual successor to Banjo-Kazooie, but to prove that the ’90s platformer can be more than just a mere nostalgia trip. Yooka-Laylee is the result, and is an ode to the largely forgotten genre, poking plenty of fun at its roots and the video games industry in the process.

Yooka-Laylee has a simple story and one that should feel very familiar to Banjo-Kazooie fans. Yooka, a sensible lizard, and Laylee, his eccentric bat buddy, are lounging around one day in their home in Shipwreck Creek when suddenly Laylee’s magical book is sucked through the air, its glistening golden pages scattering themselves in transit. It turns out that the evil Capital B and his sidekick Dr. Quack have created a machine to steal all of the literature in the world in order to convert it into pure profit. In true heroic fashion, Yooka and Laylee decide to embark on an adventure through the halls of the baneful business known as Hivory Towers to collect all 145 golden Pagies and to put a stop to Capital B’s plans.

The bulk of your time in Yooka-Laylee will be spent exploring the Grand Tomes – large books within the Hivory Towers hub world that transport the humorous duo to magical worlds. Each of these has 25 Pagies scattered throughout them, requiring players to solve puzzles or complete weird and wonderful challenges to grab ’em. Entering Yooka-Laylee’s first world initially feels a little overwhelming, and this continues with each new Grand Tome that you unlock. Each location is filled with tons of activities, characters, and sights to check out and explore, and simply knowing where to start with it all can be tricky. But that’s also the game’s beauty. Picking up all of the Pagies from each world will take some time, as you’ll be piecing together what abilities you’ll need for certain challenges or each world’s boss battle, or simply trying to figure out how you’ll reach a particularly hard-to-reach ledge to access a whole new area. Each world is essentially one big puzzle in and of itself, and the more time you spend exploring, the more its pieces will fall into place.

Unfortunately, not all Grand Tomes are created equal, and Yooka-Laylee’s fourth world is most definitely one that feels underwhelming. Rather than maintaining the Pagie collecting focus, players instead must collect coins which can then be exchanged for the aforementioned shiny, magical pieces of paper. While the mix up in formula is certainly appreciated, the level felt far more generic in its challenges compared to what could have been possible within this casino world. Considering you’ll need to grab at least 16 Pagies from every Grand Tome to reach the final boss (that’s if you grab all 20 from Hivory Towers), trudging around this world in a desperate attempt to move on really stunted the great sense of progression the rest of the game had given me. 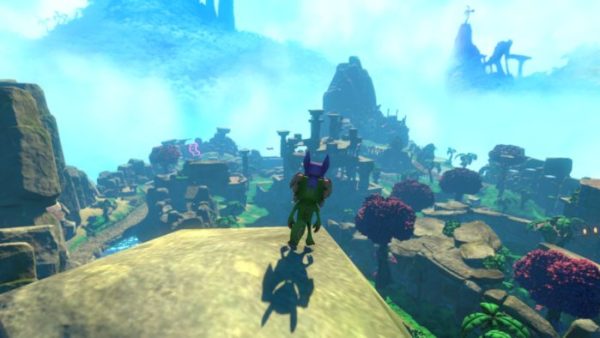 Of course, not every single Pagie is going to be available to you the very moment you step foot in a Grand Tome, and this is where Yooka and Laylee’s good friend Trowzer the Snake lends a helping… hand? And yes, that’s really his name. This wheeler-dealer will provide the duo with a number of helpful skills. You’ve got your typical glide and ground pound abilities, but alongside these, Yooka can eat things from around the world for short-time buffs, or blow a bubble underwater so that the duo can navigate these areas with ease. This eclectic mix of abilities has allowed Playtonic to get really creative with how and where they lock Pagies and other collectibles away. Some challenges in the first world won’t come clear until your two or three worlds down the line, with each Grand Tome ramping up the platforming challenge.

Sure, you can expand each of the Grand Tomes by spending some of your hard-earned Pagies to make the worlds even bigger, but the real upgrade in exploration in these worlds happens when you return with an arsenal of new abilities at your disposal. As such, I was always returning to previous worlds (unless I’d cleared it out of Pagies) thinking of a particular challenge I could use a new ability on. 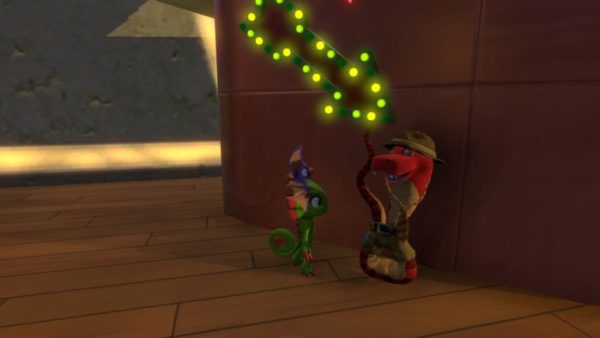 Alongside checkpoint races and boss battles, each Grand Tome has a ton of interesting stuff for you to collect and check out. Rextro, the retro game-loving T-Rex, is always about with one of his games if you can find the Play Coin hidden away in each world. Butterfly Boosters extend your health gauge, finding a Mollycool can see the duo adopt a weird and wonderful transformation thanks to a doctor and her D.N.Ray, and five Ghost Writers are waiting to be captured if you can figure out where they’re hiding and how to catch them.

All of this leads to a very satisfying sense of progression throughout Yooka-Laylee’s duration. You jump into a world, grab some Pagies, expand the Grand Tome further, grab even more Pagies and collectibles, move onto the next world, use the Quills you’ve collected to unlock new moves, and revisit old worlds to polish off anything you couldn’t get the first time around. It sounds like a classic collect-a-thon, and that’s because it is. Revisiting these earlier Tomes doesn’t feel boring or repetitive, though. In fact, some of the most gratifying moments in Yooka-Laylee come when you finally crack that puzzle you failed to overcome hours ago.

In creating this ’90s platformer throwback, however, Playtonic Games doesn’t exactly push the envelope with anything it’s doing. In fact, it seems to suffer from some of the same problems that plagued similar games all of those years ago. The camera, while great for the most part, can sometimes go into autopilot and give you the worst viewpoint possible. Considering some of the Pagies in Yooka-Laylee require some accurate jumping, it becomes a nuisance that, in 2017, no longer really feels acceptable.

Even more perplexing, though, is the fact that the duo handle perfectly right up until you finally unlock the ability to fly. Then you’re left with inaccurate feeling controls, which, when combined with the camera’s autopilot habit, make some of the collectibles in Yooka-Laylee’s worlds seemingly way more difficult than they really should be. You’ll get the hang of flying eventually, but you’ll still have those moments where you’ll spend far longer trying to grab that collectible hanging in mid-air than it really should take. 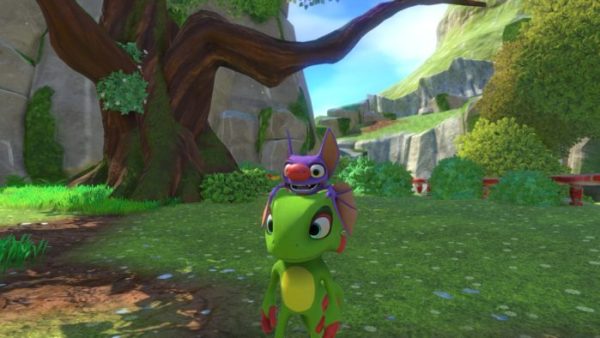 Yet, despite these niggles, Yooka-Laylee remained one of the more enjoyable and lighthearted experiences I’ve had this year, and gave me that same warm fuzzy feeling of nostalgia that last year’s Ratchet and Clank instilled in me over its course. The vibrant worlds are bursting to life with colors and weird and wacky characters, the soundtrack is so catchy I find myself humming it for hours after I put the game down, and the self-awareness and constant humorous jokes at its own expense never missed the target . Whether it’s the self-deprecating comment about its interim boss being a “budget boss” or Laylee constantly putting Rextro down for his boring old games and his pixelated looks, you’ll find it hard not to chuckle to yourself as you play.

Of course, after adventuring through Yooka-Laylee’s Grand Tomes, collecting countless Pagies as you go, you’ll finally be able to face-off in the final boss encounter. You won’t need to collect all 145 Pagies to advance here, meaning that there’s ample reason to continue exploring and solving puzzles once the credits roll for all you completionists out there. Plus, Yooka-Laylee features a four-player local multiplayer mode filled with Rextro’s arcade games, so you can always come back for some antiquated mini-game fun if you’re so inclined.

Yooka-Laylee is basically the Banjo-Kazooie game players have been waiting well over a decade for. No matter your age, Yooka-Laylee has something for everyone, be it the colorful characters and worlds that youngsters are sure to love, or the crude humor sprinkled throughout to appeal to the older audiences. While the game certainly has its flaws, its charming worlds, delightful soundtracks, and throwback to the good ol’ days of gaming make for one heck of a trip down memory lane. If you needed proof that old-school platformers still have a place on the gaming scene, look no further than Yooka-Laylee.