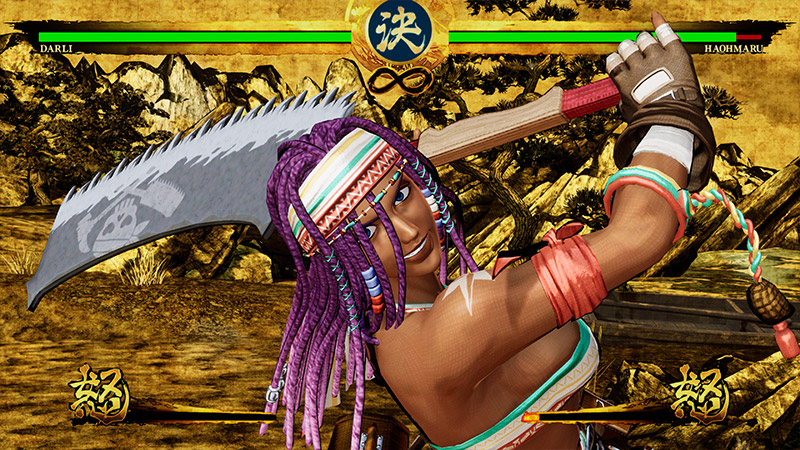 Following the latest reveal in the weekend, SNK updated the official website of Samurai Shodown including some charming new artwork and screenshots.

The new artwork focuses on the new members of the cast Wu-Ruxiang, Darli Dagger, and Yashamaru Kurama. We also get to see two of them in the screenshots, alongside the rest of the playable characters.

Darli Dagger is a shipwright, and we also learn some new elements about her. Her place of birth is unknown (but she was born at sea) and her chosen birthday (since the real date is also unknown) is August 8. She loves ships and freedom, and hates people who are good only at talking. Her special skill is being able to build basically anything.

Wu-Ruxiang is a Chinese in service of the Emperor of the Quing Dynasty, she was born in Beijing on May 5 and her blood type is 0. Her favorite thing is her sister’s cooking, while she hates her grandfather’s preaching and aching muscles. Her special skill is searching for lost things.

If you want to know another reason why she’s cool, just look below.

If you face Wu-Ruixiang it will be wise to #EmbraceDeath
…
Mainly because that foot hurts. pic.twitter.com/ZDBUW3tJQ0

Yashamaru Kurama was born in Yamashiro, Atago, on April 30. He doesn’t have a blood type due to his Tengu powers. His favorite thing is a cloudless night with a full moon (what a poet), and he hates the Tokugawa Shogunate and villains who oppress the weak. His special skill is controlling the wind.

Samurai Shodown releases in Japan on June 27 for PS4 and Xbox One, with PC and Switch versions coming in winter 2019. Interestingly, the western website of the game still lists only “June” as a release window, but unless SNK is going to launch the game earlier in the west, it can’t really be that far from the Japanese launch.