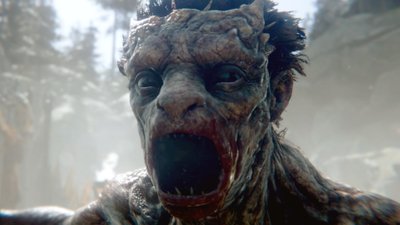 Darkborn, the debut Nordic fantasy game from developer The Outsider, has revealed its gameplay for the first time in an exclusive 15-minute video from IGN.

This it the first real look at the game that puts you in the role of an infant monster. Humans are decidedly the villains of this story, and after your family is torn apart by vikings, you must grow stronger in order to seek revenge.

The video(which you can check out below) offers a look at a plot establishing part of the game, showing your character, a Darkborn, asleep in a cave with its clan.

Your loving monster family are quickly captured by humans and it’s up to you to go after them. With a gentle voice guiding your way you, the “little one”, must track your missing parents out of the safety of your cave and into the wilderness.

The gameplay video gives us a look at first-person stealth and gory combat, showing off some of the impressive skills you have as a monster, like your ability to fly and your “deep sight” vision mode. It looks like you develop even more powers throughout the game as you gradually change from an innocent child to a terrifying predator.

The voice guiding your monster is shown to offer advice on navigating through the world – such as “child, you cannot traverse that gap” when you come upon a ravine – in a manner reminiscent of the furies in the also viking-themed Hellblade: Senua’s Sacrifice.

This is The Outsider’s first game and was up until recently codenamed Project Wight. Glimpses of it in that iteration have been around since 2016, but now it’s re-emerged under a new banner with the goal of telling a fresh story with a different perspective.

We hope people experience a new perspective… We want them to want to help this lone creature succeed against seemingly impossible odds on their journey of knowledge and vengeance.

Darkborn is currently still in development in a pre-alpha state. There’s no release date set for the game yet but after this promising video we hope that changes soon.