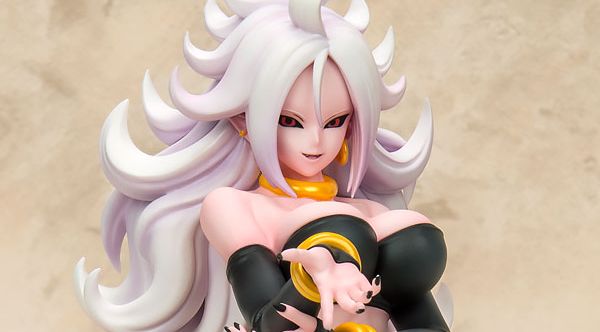 Dragon Ball FighterZ gained a lot of popularity both among fighting game enthusiasts and casual players, and its new character Android 21 is finally getting the figure treatment.

21 was created by Akira Toriyama specifically for the game, and Tokyo-based manufacturer MegaHouse is taking on the challenge to do her justice in full 3D.

The figure, which was originally showcased with a prototype at Wonder Festival, is available for pre-order at several retailers (for instance AmiAmi) as part of the Dragon Ball Gals line.

It will be released in late June for 12,744 yen, which translates into just south of $115. As usual with this kind of figures, while it won’t be officially released in the west, there are plenty of purchase options available.

Approximately 21 cm tall, it’s sculpted by Ryutaro Kaminaga of Yamanekotei -nekohouse-, and painted by Kenji Andou. It also comes with two face options in order to showcase both 21’s evil and good faces.

You can check out a full gallery of images below.

Dragon Ball FighterZ is currently available for PS4, Xbox One, Switch, and PC. If you want to know why it’s so well loved, you can check out our review.

The game was recently confirmed to be part of the official line-up of titles that will appear on the main stage of the EVO 2019 fighting game tournament.