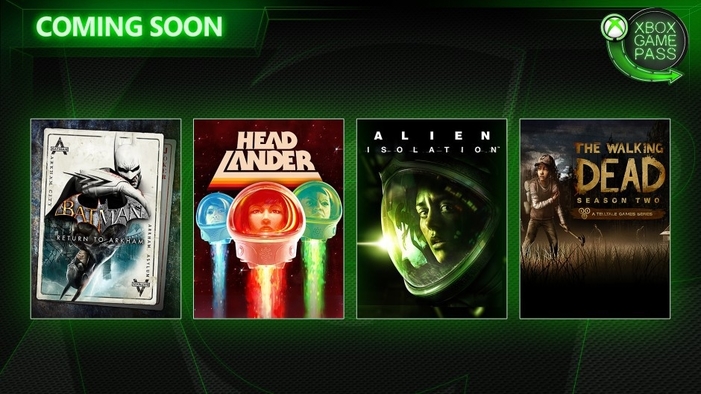 Microsoft has announced the next slew of games to hit their subscription service, Xbox Game Pass. Throughout the next week or so, subscribers will have access to The Walking Dead: Season 2, Batman: Return to Arkham, Headlander, Epic Mickey 2, and Alien: Isolation.

Xbox Game Pass is a paid subscription service that gives players access to a variety of free games; each month, games are added to the service and sometimes, Microsoft exclusives launch on Xbox Game Pass such as Crackdown 3 and Sea of Thieves.

On Feb 21 (tomorrow), the first three of the five titles will be released. Batman: Return to Arkham contains a fantastic pairing of two of the best superhero games ever, Batman: Arkham Asylum and Batman: Arkham City –both complete with all of the released downloadable content.

Headlander is a 2.5D Metroidvania-style game developed by Double Fine and published by Adult Swim that has you exploring and solving puzzles in a futuristic setting influenced by 70s science-fiction. Disney’s Epic Mickey 2: The Power of Two, a multiplayer platformer starring the famous mouse and Oswald the rabbit will also be coming on the 21st.

On Feb 28, Xbox Game Pass will be getting Telltales second season of The Walking Dead, which stars Clementine after being “separated” from Lee in the original game. The survival horror game based on the film franchise with the same name, Alien: Isolation, will be available as well.

For more on Xbox Game Pass and the games that released for the service earlier this month such as Crackdown 3 and Shadow of the Tomb Raider, you can check that out here.