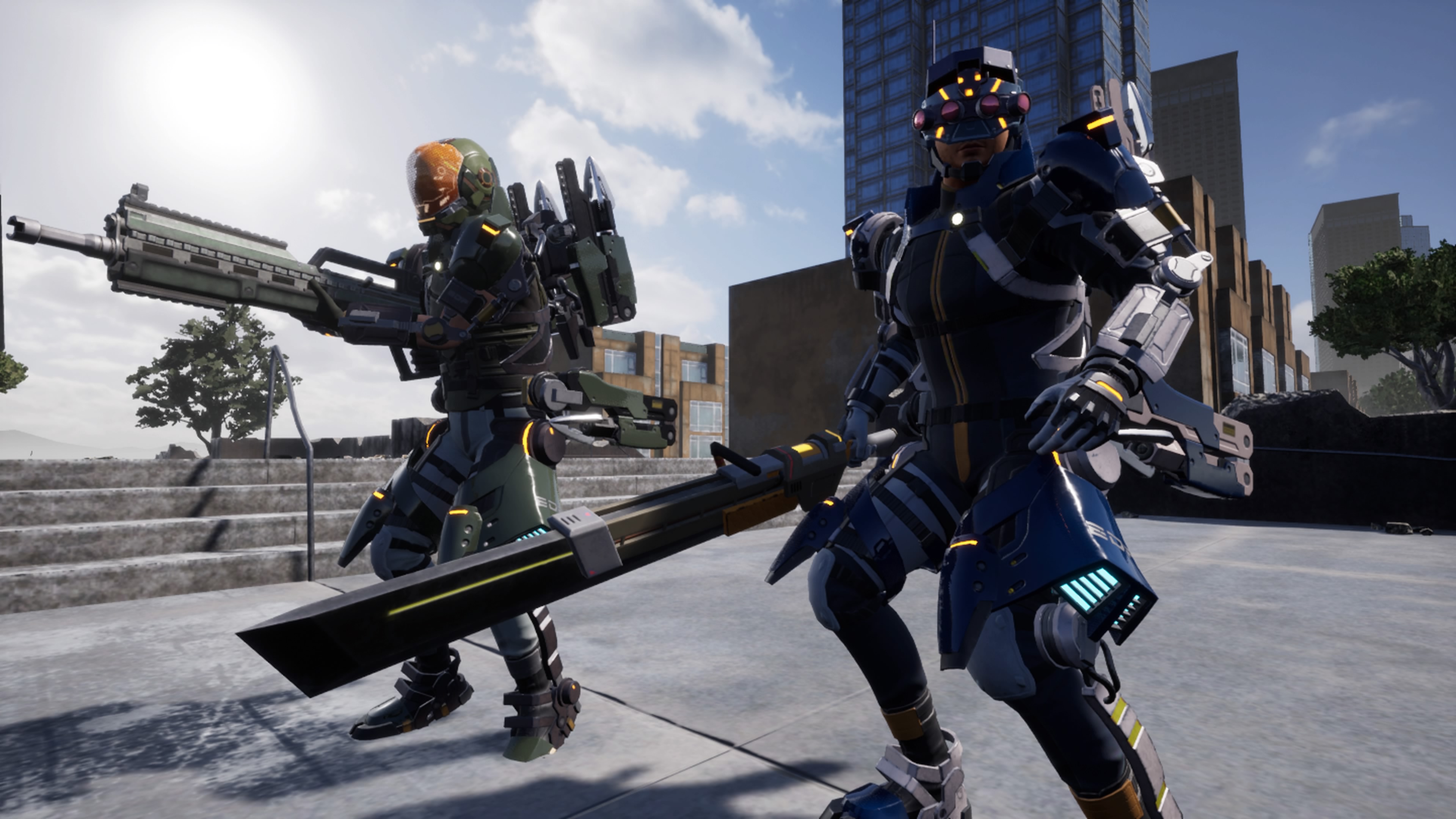 The screenshots showcased the recently-introduced Prowl Raider PA-Gear that we’ll be able to use in the game.

“The latest PA-Gear, based on prototype gear developed by the Kindred Rebellion which was obtained, analyzed, and completed by the EDF.”

This gear stands above the others with the astonishing mobility of its wire-powered “E-Needle” ability, and the “G-L.I.A.R” ability that can be used during Overdrive to deploy a giant creature. However, the experience of a truly seasoned soldier is essential in order to effectively control the oft erratic E-Needle, and harness the potent G-L.I.A.R.

Users of this PA-Gear can move at high-speed and in three dimensions by pulling themselves up from the needle at the tip of the special wire which can be thrusted into buildings, trees, ground, and enemies. The needle can be driven into anything allowing the users can fling themselves into the air.

By using this mobility, users may cut down the distance instantly between themselves and the enemies or even leave them far behind. Even an aerial dogfight may be possible, if one can master this skill.”

We also learn how the G-L.I.A.R. works in Earth Defense Force: Iron Rain in more detail.

“Essentially a living tank, a G-L.I.A.R. is a giant creature controlled using the Prowl Rider’s E-Needle ability, which sends neural pulse waves after linking to the giant creature’s nerve fibers. The concept of “domesticating” the giant creatures was initially devised by the Kindred Rebellion, with the EDF later rushing to begin their own research into it.”

The first Aggressor that we’ll be able to domesticate using the power of the G-L.I.A.R. tech is the Storm Ant.

“The first G-L.I.A.R that the EDF mobilized in actual battle.

This specimen is a Storm Ant that was salvaged from the Rebellion’s base along with the Prowl Rider technology, and is currently the EDF Science and Technology Bureau’s top research priority. After repeated field testing, G-L.I.A.R. is now being used by the Blast team, but much of its control mechanics remains shrouded in mystery, with some calling it a “black box” that could go wrong at any time.

All we can do is trust the bug geek…err, tech expert that EDF Science sent. He claims it is a “kind and gentle creature.”

“The attack of the Ant Soldiers is mainly two-fold. Other than the direct attack using their large chin, it shoots out strong acid from their stomach. Also, it climbs perpendicular wall without difficulty. So yeah, yesterday’s enemy will certainly become today’s friend, right!?”

“In order to make good use of the E-Needle and maximize the performance of the G-L.I.A.R., you will also need to be very skilled, and only one who can handle other PA-Gears freely and perfectly may be able to become a good Prowl Rider. Here are some example screen-shots for you to understand “how awesome looking combat will be possible by becoming an ace Prowl Rider.”

“If you are skilled enough, you can even set an aerial dogfight against the gigantic Beizaland and other flying enemies by driving the needle into them. Cut down the distance and destroy them with your sword. You can taste and experience a feeling of flight which is quite different from that of the Jet Lifter.”

More screenshots showcase one of the enemies that we’ll have to face when fighting in Earth Defense Force: Iron Rain, the Winged Ants.

“A giant creature with the ability to fly. Based on their appearance, they are believed to be a relative of the Storm Ant; however, not much else is known about them. They can spit acid while in the air, which is a deadly attack against ground units.

Because many giant creature nests appear in areas full of Winged Ants, it is thought that fully developed Winged Ants become Queen Ants.”

Another enemy introduced today is the Crazy Ant.

“A highly aggressive giant creature, quicker and more ferocious than the Storm Ant. It can also spit acid in multiple directions.

These creatures first emerged in South America, and were originally engaged by the forces of the South American EDF branch, but after it was observed that they prey upon other giant creatures, the EDF considered a plan to use them tactically in combat. However, the plan backfired, instead encouraging the Crazy Ants to reproduce at an abnormally rapid speed, leading to the demise of EDF South America.

These creatures have since migrated North, and are swiftly expanding their territory along with the Storm Ants.”

You can check all the screenshots out below. If you want to see more, you can also enjoy a ton of screenshots released back in November.