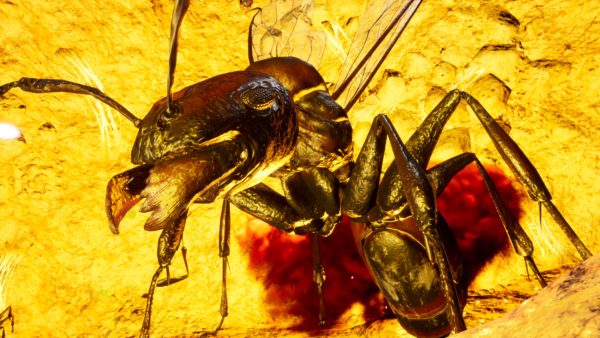 We get to see several monsters defined “Aggressors” that we’ll have to fight in the game. This includes the Hivecraft and its (rather disgusting) giant insects. Those include the Storm Ants, the Bomb Beetles, the Wolf Spiders (alongside their “Wolf Spide Baby” variant), the Deathstalkers, and the Sideros.

Then we take a look at the gigantic Sentitrons, including the Scourgers, the Attack Pods, the Harvesters, the Gargant, and the Raidship.

Of course, it’s almost obligatory to have giant Godzilla-like monsters. In this case we have a 60-meters behemoth named Beizal.

Looking at the good guys, we see the various kinds of EDF troops armed with “PA-Gear” (PA stands for Physical Augmentation): the Trooper, the Jet Lifter, and the Heavy Striker.

PA-Gears are powered by Energy Cores, which are synthetized from the Energy Gems that can be harvested from Aggressor corpses.

Last but not least, we meet the Kindred Rebellion, which opposes the EDF and strives to surpass its powers with its warmech named Nightcrawlers. One of their main goals is to steal energy gems to increase their power.

You can check out all the sdcreenshots below. Earth Defense Force: Iron Rain will release in 2018 exclusively for PS4.

If you’re interested in more EDF, you can check out our the trailer for Earth Defense Force 5, which will also come west on December 11th for PS4.