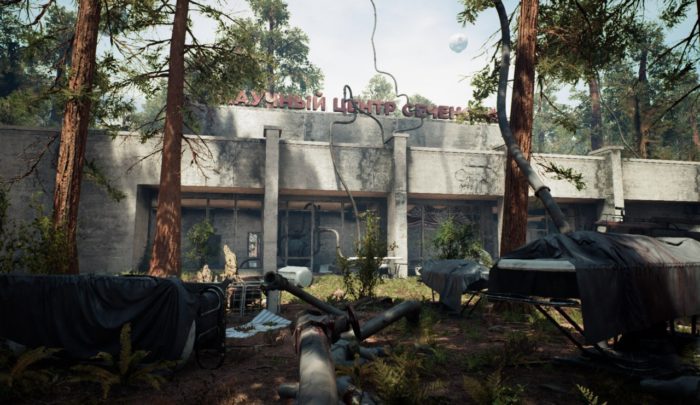 Mundfish’s Atomic Heart has just received a new gameplay trailer full of bizarre and horrifying sights. The video was released by IGN and provides an extended look at the game’s world and combat.

For those unfamiliar with Atomic Heart, the game is a first-person shooter set in an “alternate universe during the high noon of the Soviet Union.” Many have compared the game’s aesthetic and gameplay to games like BioShock and Metro 2033.

The gameplay trailer begins outside as the player enters a wooded area that appears only to be occupied by a variety of mechanical creatures.

Despite the player shooting some of the machines, the creatures seem to be undisturbed by their presence as they navigate past abandoned cars, empty buildings, and what appear to be gravity-defying bodies of waters containing vegetation and dead humans.

Eventually, a humanoid machine attacks the player and pushes them into a hole that leads to an unknown facility.

Similar to the buildings outside, the area appears abandoned other than a small handful of hostile machines.

Through exploring the new surroundings, the player finds a melee weapon and a shotgun. Both of these are put to good use taking down enemies encountered in the facility.

As the video continues to move through the interior environment, viewers see that the building appears to be housing some sort of strange farming equipment, as machines are seen guarding glass containers with animals and plants inside of them.

The player explores further into the facility seeing more odd mechanisms, but the video ends abruptly when an incredibly large rolling robot attacks them.

The trailer is loaded with even more exciting details and can be found below. For more information on Atomic Heart, be sure to check out our coverage of the game’s first and second trailers.

Atomic Heart has not been given an official release date yet, but a beta will be available for those who pre-order the game sometime before Dec. 31, 2019. The game is set to launch on PC, Xbox One, and PS4.