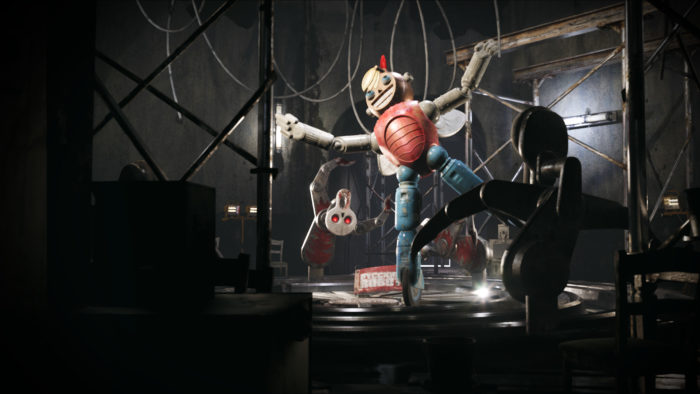 Last year, the indie developer Mundfish announced its upcoming game Atomic Heart. The trailer was trippy, fantastic, and somewhat reminiscent of Bioshock. Mundfish is finally ready to unveil more about the title with its new official trailer, which is just as trippy as the first.

While the new trailer features all the gravity-defying water tentacles as the first, action is at the forefront. The video reveals that not only will players go up against a wide variety of enemies, including sphere-headed robots and cyberzombies (some of whom are clown-themed), they will have no shortage of weapons. The teaser trailer introduced an axe, shotgun, wrench, pistol, and machine gun; and the new trailer adds a sledgehammer wrapped in barbed wire and a robust weapon customization system to the repertoire. Players will be able to modify their weapons with plenty of parts that alter everything from reload speed to noise, which implies stealth will play a huge part in Atomic Heart.

Even though Atomic Heart, on the surface, appears to be Bioshock: Soviet Union Edition, the trailer sports several key differences. Combat in Atomic Heart will apparently be more arcade-like, as players will be able to actively sidestep incoming attacks and swiftly execute enemies. Each weapon will come with execution attacks that are unique to each enemy. But, Atomic Heart will not just be about combat. According to the trailer, the game will feature certain segments where players have to run away from impossible odds and barricade doors. However, we don’t know if these gameplay sections will be relegated to cutscenes or if players will take an active role in fortifying locations and running to fight another day.

While the trailer doesn’t overtly reveal any major spoilers about Atomic Heart’s story, such as why the game is overrun with robotic nightmares and physics-defying anomalies, it includes one small hint in a blink and you’ll miss it moment. A large map is displayed at the end of the video, and it indicates the game will take place in a research lab named after a man named Sechenov. This could potentially be a reference to Ivan Mikhaylovich Sechenov, a real-life physiologist who laid the groundwork for much of what we know about neuroscience. Ivan Pavlov even regarded the man as the “Father of Russian physiology.” What does a neurologist have to do with killer robots and water tentacles? Probably more than we think.

Atomic Heart is scheduled to release later this year for the Xbox One, PlayStation 4, and PC.