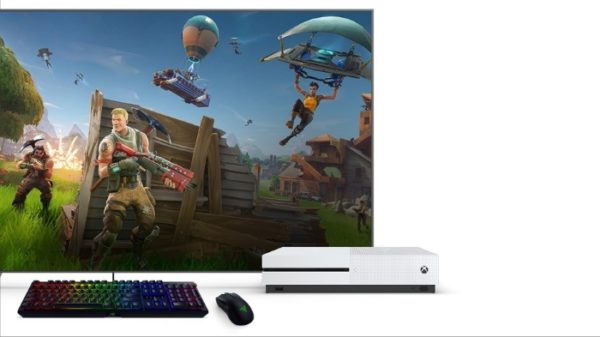 The November 2018 update for all Xbox One consoles is rolling out to users today, adding mouse and keyboard support alongside other features.

The update allows a PC keyboard and mouse to be used with certain games as long as developers will support it in their games. The only two titles available with the new feature are Fortnite and Warfarme, and Fortnite: Battle Royale has been offering input-based matchmaking since the Season 6 update in late September.

Microsoft is partnering with gaming hardware company Razer on a mouse and keyboard built specifically for playing on Xbox One and Windows 10 PC. The keyboard will feature a dedicated Xbox key and a lighting capability described as “immersive game-controlled lighting effects.”

The November update also adds improvements for the Xbox Skill app for Cortana and Alexa voice-controlled devices introduced last month with new commands and an Alexa beta for U.K. English voice recognition for U.K. players. Amazon is launching an Amazon Music app for the platform today as well, while the console’s search function has been expanded to include results from Xbox Assist and games owned through memberships such as Xbox Game Pass and EA Access.