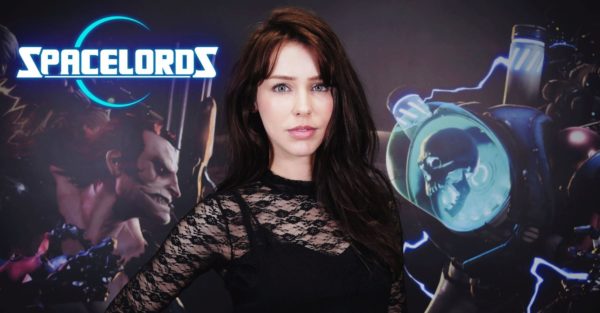 Dutch actress, model, and singer Stefanie Joosten has become popular among gamers due to her role as Quiet in Metal Gear Solid V: The Phantom Pain. Today we learn that she has landed her next video game gig in Spacelords.

Today developer MercurySteam announced that Joosten joined the cast of the 4 vs. 1 free to play third-person shooter. She will lend her likeness and voice to a brand new playable character named Sööma, who will be released in early 2019.

She also provided a comment via the accompanying press release, describing how she met the MercurySteam team, and how the game’s unique visual style impressed her.

“I met with several MercurySteam team members at a gaming convention last year, where I had the chance to play Spacelords for the first time and was very impressed by the unique visual style of the game. We agreed it would be cool to collaborate in the future if the opportunity ever arose, and I am really happy to say that the time is here and now!”

Sööma is part of the Umbra Wardogs faction, and she was born in the Cydonia region of Mars. She is part of a cult devoted to helping those who suffer pain and oppression, but the expedition to the Broken Planet is set to put her beliefs and natural kindness to the test.

“Sööma is a really interesting, layered character to play. She possesses great inner strength and fights with the conviction of someone who is certain her cause is just, but still harbors a naivety that will clash with the conflict she is about to become involved with.”

Studio Director Enric Álvarez also gave his own insight within the press release:

“We have a standing commitment to our community to continue adding top-quality content to Spacelords, and creating this new, iconic character in collaboration with Ms. Joosten adds a whole new level of depth and charisma to Sööma. It has been a real pleasure working with Stefanie. We are sure Sööma will become a major “fan favorite” for all our players!”

Spacelords is currently playable for free on PS4, Xbox One, and PC.

You can check out a video featuring Joosten, alongside the first artwork of Sööma, below. While we wait to play as her in Spacelords, we can still do so in Metal Gear Solid V: The Phantom Pain thanks to a recent update, while we speculate about her possible appearance in Hideo Kojima’s Death Stranding.