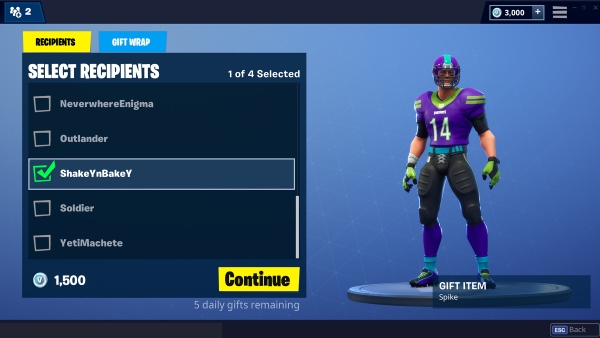 Epic Games announced today that Fortnite: Battle Royale players will be able gift cosmetic items to each other for a limited time.

The gifting feature, which has been hinted at since the beginning of Season 5, is available today alongside the 6.31 update for all platforms except for iOS devices. Epic said in the announcement post that gifting was not possible for the iOS version since “Apple’s policies prohibit it.”

Fortnite: Battle Royale players will see that items in the in-game items shop now have two options: “Purchase Items” and “Buy As A Gift.” Players will be able to select which friend from their friends list to send a gift to alongside a custom message that is optional, and the receiving players should see the gift the next time they log in.

The studio outlined a few requirements for gifting including multi-factor authentication, players must be friends for at least 48 hours before a gift could be sent, and make sure the option to disable gift receiving is unchecked in account settings. Players will also be able to gift only three times within a 24-hour period with cosmetics currently available in the in-game item shop, and all gifts purchased cannot be refunded.

Gifting will only be enabled for one week starting today, but Epic has called this an “initial gifting period” which could mean it might return in the future.