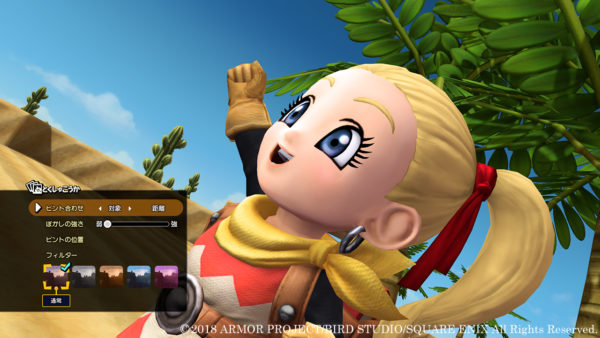 Today the Japanese branch of Square Enix released a new gallery of screenshots of the upcoming JRPG-meets-Minecraft Dragon Quest Builders 2.

First of all, we get to see the photo mode, which allows players to move the camera’s position and angle freely, zoom in and out, remove the main character from the screen, add blur, post-processing effects, and filters like sepia or monochrome.

It’s also possible to build a bulletin board where you can post your pictures so that other players can see them, “like” them, and even go to the location where each picture was taken.

Last, but not least, the Builder’s Pencil lets you record a building’s blueprint including the surrounding objects. Afterward, you can rebuild them.

You can check out the screenshots in the gallery below. If you want to see more, you can also enjoy the previous gallery of images, and watch the game’s opening cinematic.

Dragon Quest Builders 2 will releases in Japan for PS4 and Nintendo Switch on December 20th. A western release has been hinted at, but not officially announced just yet.

Hopefully, Square Enix will make the announcement soon enough. Of course, you’ll hear all about it here on Twinfinite when that happens.