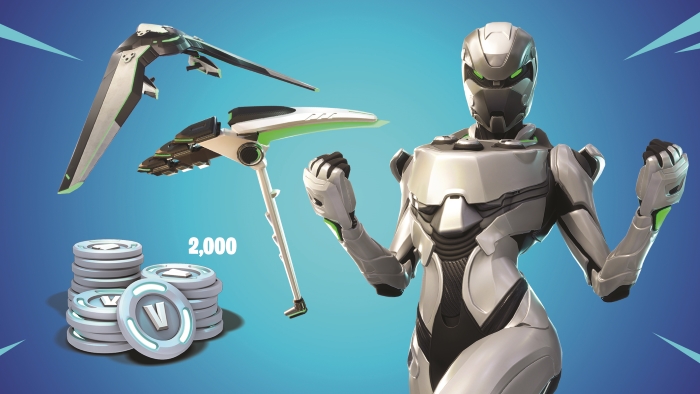 A new Xbox One S bundle is coming containing Epic Games’s popular Fortnite and a host of in-game goodies exclusive to the platform, Microsoft revealed during its Inside Xbox stream today.

According to Xbox Wire, the bundle includes an Xbox One S with a 1 TB hard drive, a wireless controller, 1 month trials for both Xbox Live Gold and Xbox Game Pass, a full-game download of Fortnite, the Eon cosmetic set, and 2,000 V-Bucks (about $20 value). The exclusive set of cosmetics pictured above are the Eon outfit, Aurora glider, and Resonator pickaxe with a silver and light green color scheme representing the Xbox brand.

The Xbox One S Fortnite bundle will retail for $299.99 and is in retailers worldwide sometime this week, though it can be pre-ordered through Best Buy and the Microsoft Store. The bundle comes just in time for Battle Royale’s Season 6, which is scheduled to start this week on Thursday, Sept. 27.

Earlier this month, Nintendo announced that the Switch would be receiving its own Fortnite bundle with an exclusive cosmetic set and 1,000 V-Bucks coming Friday, Oct. 5. Sony’s PlayStation 4 also had a bundle for the game last July offering the Royale Bomber skin and 500 V-Bucks, though it was only available in European markets.