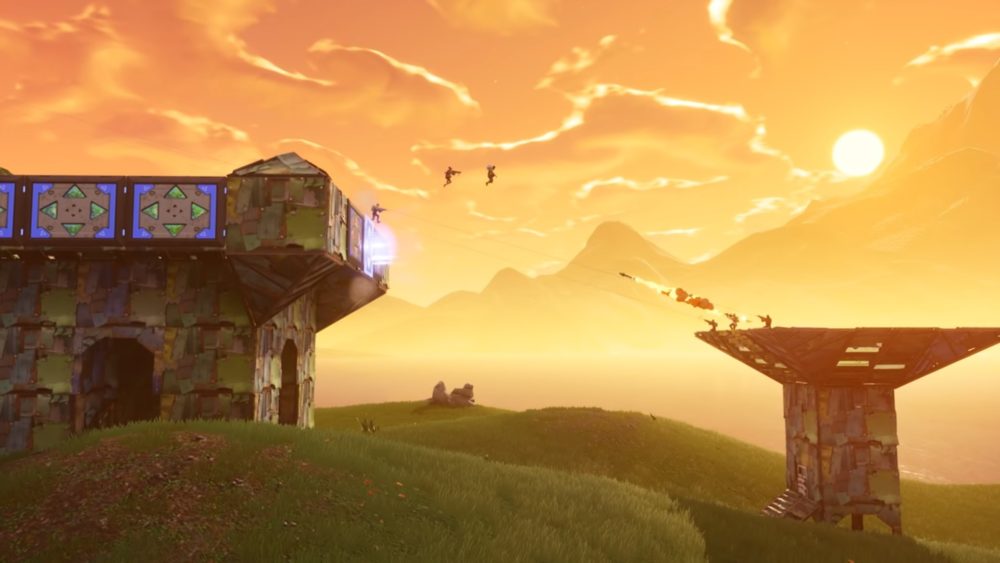 Fortnite’s latest patch notes have been released, with its biggest change being Epic Games’ decision to diversify the pace of in-game building with a new consumable. The latest patch brings with it the Port-a-Fortress, which is bound to be contentious, along with the introduction of new items for Playground, a new Save the World weapon and challenge week, a limited time solo mode, as well as some general ironing out of technical issues.

The largest introduction, the Port-a-Fortress, is a Legendary item that instantly builds a large base on use. The base includes built-in Bouncers for ease-of-exit and, judging by its associated video, constructs a base incredibly quickly. The item can be found in vending machines, chests, supply drops, and supply llamas. In all honesty, it looks like it’s going to be a source of frustration for veteran players, but there is space to counter it with careful building:

Playground is also seeing an addition in the form of Spiky Stadium. Epic Games, “inspired by the amazing things [players] have been making within Playground,” introduced the stadium to improve the mode’s mini-game potential. The stadium will instantly spawn on use of the item, ready-made for any minigame the community can think up.

The game’s PvE mode, Save the World, is also seeing some love in the form of a new Flintlock Launcher that comes with bounceable cannonballs. The rifle will be available on the Weekly Store Wednesday, September 19 at 8 PM ET until Wednesday, September 26 at 8 PM ET. This week’s Horde Challenge features enemies immune to crowd control effects, leaving stuns, slows, and knockbacks as effectively useless.

Finally, the last major update is the introduction of Soaring Solos, a classic Battle Royale mode where gliders can be re-deployed by pressing the jump button when falling from large heights. Alongside these major changes is a litany of smaller bug fixes and performance tweaks, which can be found on the patch notes webpage. What seems curiously missing is the community’s calls for latency issues and aimbots in Fortnite to be dealt with, so their reaction in the coming days will certainly be interesting.