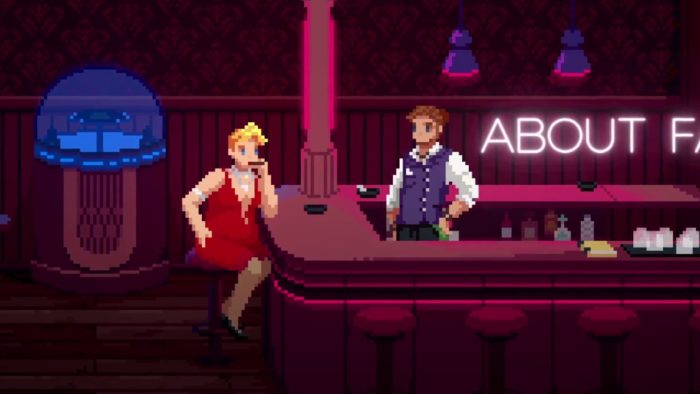 The Red Strings Club is a “cyberpunk narrative experience” that questions whether the loss of self is worth happiness. The art style is reminiscent of SCUMM games like Beneath a Steel Sky, and it features some interesting mechanics that make it stand out among its indie adventure contemporaries.

You first take the role of information broker Donovan who plies his wares under cover of his basement bar (the titular Red Strings Club). The dialog is the key here, and you’ll find yourself carefully weighing each choice of words. Donovan’s unique gameplay mechanic is that he makes drinks that perfectly match his customer’s desires. During his conversations with people, the game will switch to a cocktail-mixing mini-game in which you have to pour the right combination of liquor to stimulate certain emotions for people. You can use this to take the dialogue choices down a particular path and exploit a person’s weaknesses to obtain the information you want.

The second character you play in The Red Strings Club is the android Akara-184. Donovan and hacker Brandeis (who is the third playable character) are able to access Akara-184’s memory banks and eliminate its slave circuitry. Akara typically works making modules for humans that allow them to manipulate their own emotions. Instead of following their order though, you can make the module you think would be best for them instead. You do this via a mini-game in which you build the module on a sort of pottery wheel.

In the background of the whole story in the impending release by Supercontinent Ltd, a corporation who claims altruism, of the Social Psyche Welfare system. Social Psyche Welfare promises to eliminate the negative emotions that afflict humanity and bring greater unity to everyone. However, our three protagonists begin to view this new system as brainwashing that will end up robbing humans (and perhaps androids) of their free will.

The Red Strings Club definitely has some heady material, and you can play it for yourself right now on PC via Steam, GOG, or the Humble Store.