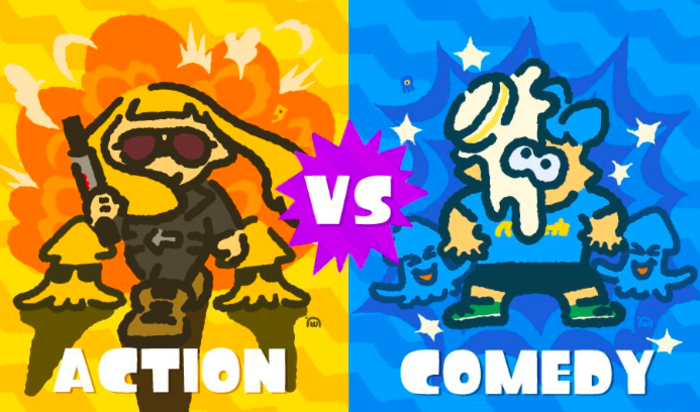 2018 is here and Nintendo doesn’t plan on slowing down when it comes to supporting Splatoon 2 – especially in the form of new Splatfest’s. Nintendo’s new Twitter account for everything competitive, Nintendo Versus, has announced the next Splatfest for Splatoon 2 which pits fans of action movies against lovers of comedy films. Being that it’s the first Splatfest of the year, Nintendo has decided to make this one of the biggest competitions ever by making it a global Splatfest.

The battle between Team Action and Team Comedy will take place in the Americas, Europe, and Japan – the event will kick off on Jan. 12 at 8 p.m. PT. Go grab your inkling friends, decide on a team to join, and have fun fighting for your favorite genre of movies.

Which genre of movies is your favorite and which side will you be on once the competition starts? As for us, it’s a pretty difficult choice, but since we only have a few more days left to choose, watching every action and comedy movie ever made might help us decide… or on second thought, flipping a coin could work too.