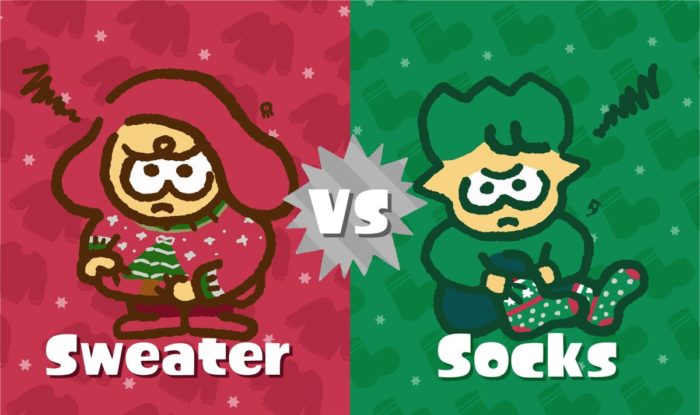 When you think of bad Christmas gifts, dodgy sweaters and random pairs of socks are more often than not near the top of the list. Splatoon 2, however, wants to you consider which of these two rather bland gifts you’d prefer if given a choice for its next Splatfest event when it kicks off in the US.

The appropriately themed red and green teams will decide whether sweaters or socks will win the final Splatfest of 2017 across the Turf War mode competitive mode, where wins with your chosen team determines votes for your side.

A few days before that, Splatoon 2 will also receive its latest update that will bring in a brand new mode to competitive mode. Clam Blitz will task teams to collect clams around each arena and attempt to deposit them in the goal resting in enemy territory. The goal is also shielded, so you’ll have to shoot it with ink to bring the shield down before you can score. Clam Blitz will be available for both Ranked Matches and League Battles. Several weapon adjustments will also come into effect.

The Sweater vs Socks Splatfest for Splatoon 2 kicks off on Nintendo Switch Dec. 15, with the 2.1.0 title update dropping on Dec. 12.