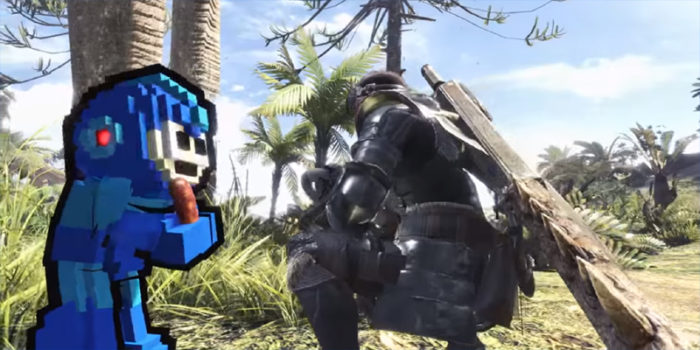 No, this isn’t a joke. In time for Mega Man’s 30th anniversary, Monster Hunter World will feature Mega Man and a few classic tracks and sound effects from the series.

In a trailer shown during the PlayStation Experience 2017 Opening Ceremony, players can outfit their felyne companions with a classic Mega Man suit complete with voxel-animated blaster attacks. Additionally, you can “hunt to the beat of classic Mega Man Tunes” to maximize your celebration of Mega Man’s 30th anniversary. Certain weapons can also be equipped with the retro sound effects from the series. Confirmed weapons so far include the Great Sword, Gunlance, Long Sword, Charge Blade, and the Bow.

Monster Hunter World’s collaboration with Mega Man marks the second crossover promotion, with Horizon: Zero Dawn’s protagonist coming as a playable character exclusively on PS4. Players can dress their hunters with Aloy’s appearance as well as her full gear and armor set. Your felyne companions can also be dressed to look like a Watcher.

We’ll have to wait and see if Capcom has more collaborations with other games as we near Monster Hunter World’s January 26 release date for PC, PS4, and Xbox One. For now, fans can look forward to the PS4-exclusive Monster Hunter World beta from December 9 to December 12.