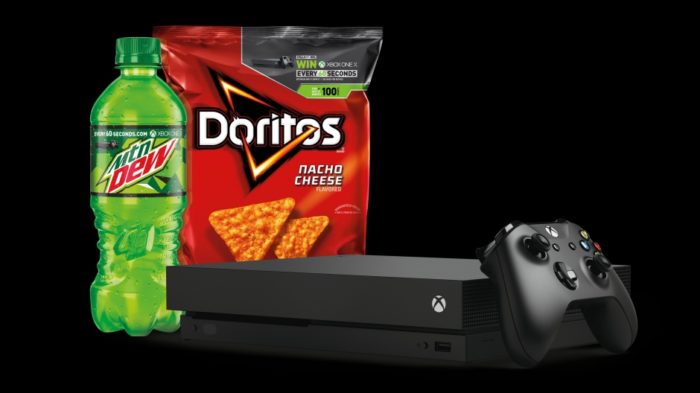 Eager Xbox fans can win a Xbox One X through a special promotion that popular snack companies Doritos and Mountain Dew have announced today.

Described as a “real-time, location-based” AR game, “The Drop Zone” is a virtual capture-the-flag contest that pits players in New York, Chicago and Los Angeles against one another, with participants using offensive and defensive power-ups in-game in order to find, claim and keep control of a virtual console. Specific details as to how the competition will work have not yet been disclosed, but the event is set to be held on November 10 (after the release of the Xbox One X on November 7).

“Xbox fans are always looking for innovation and unique gaming experiences,” said Mountain Dew’s senior director Chauncey Hamlett. “The immersive and thrilling Drop Zone experience by Doritos and DEW is a totally unique, exciting way for fans to get their hands on the most powerful gaming console today.”

Part of the “Every 60 Seconds” Xbox One X giveaway campaign, fans outside the aforementioned cities can collect codes on Mountain Dew and Doritos packaging and add them to an account. Codes in this account can then be entered to win an Xbox One X as bids.