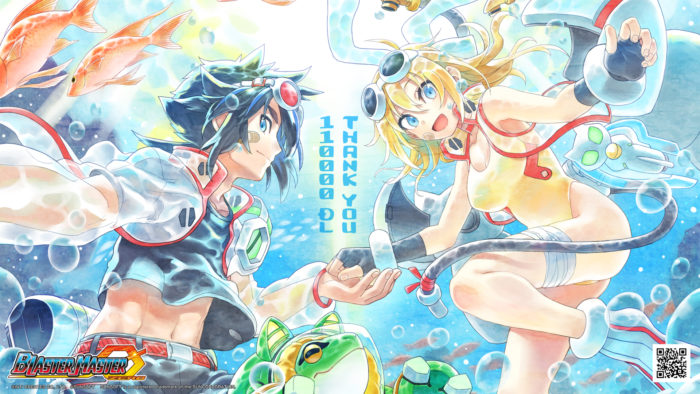 In celebration of the achievement, a free update that unlocks Boss Blaster Mode for players to battle through waves of bosses from the campaign is now available. Keep in mind that the mode will only be able to be accessed once players have finished the main game. That being said, Boss Blaster Mode includes co-op support on the Switch version of the game, giving fans the ability to pass a Joy-Con to a friend. Save slots have been tripled and EX characters can now use the “Call Sophia” ability, too.

As an added gift, players are also treated to new wallpaper illustrated by Yuji Natsume, which can be found above and at the game’s official website.

Blaster Master Zero is a reboot of the original Blaster Master and features a better presentation, new game mechanics and an updated UI. It retains the series’ classic retro gameplay, however, which is sure to be a treat for long-time devotees.

The game released this past spring and has since been getting a steady stream of DLC content ever since, including new playable characters like Shovel Knight. New characters gives players more freedom to experiment with Blaster Master Zero’s gameplay, as each personage has different skills and abilities to be used in combat.

In other indie game news for the Switch, Mutant Mudds is headed to the hybrid console with a new puzzle game included.