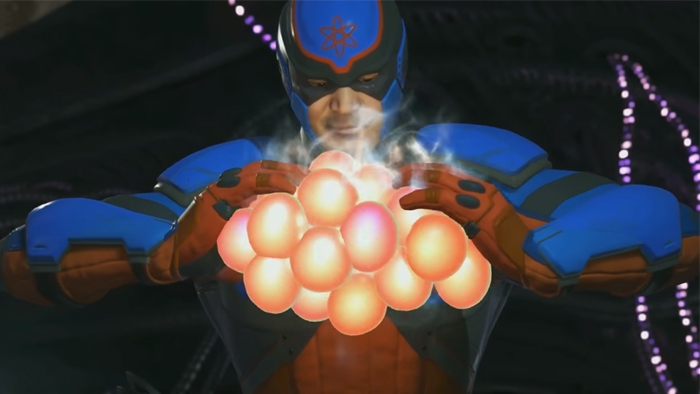 To create hype for the Atom’s appearance in Legends of Tomorrow season 3 premiere next week, NeatherRealm Studios revealed the first gameplay teaser for the shrinking character during CW’s Chasing the Cup: Injustice 2 tournament. True to his abilities in the comics, Injustice 2’s version of the Atom can shrink and grow in size to pummel opponents.

The Atom is part of the Injustice 2 Fighter Pack 3 lineup, so we can expect to get our hands on the character after Fighter Pack 2’s Hellboy becomes available. Weirdly enough, NeatherRealm might have revealed The Atom a bit too early, considering Hellboy has yet to receive a gameplay trailer. To ease fan concerns, Ed Boon announced on Twitter that both Hellboy and The Atom will receive a full-length gameplay trailer soon. “We’ve still got amazing full Hellboy (fighter pack 2) and ATOM (fighter pack 3) game-play trailers coming soon!! Stay tuned!”

Physics prodigy Ryan Choi will don the suit of the Atom in Injustice 2. Here’s a short description shared by Warner Bros: “Physics prodigy Ryan Choi took on the mantle of the Atom when his mentor — and original Atom —Ray Palmer mysteriously disappeared. Now armed with quantum shrinking technology, Ryan will use the subatomic power of the quantum bio-belt to seek out his lost friend and further the fight for justice.”