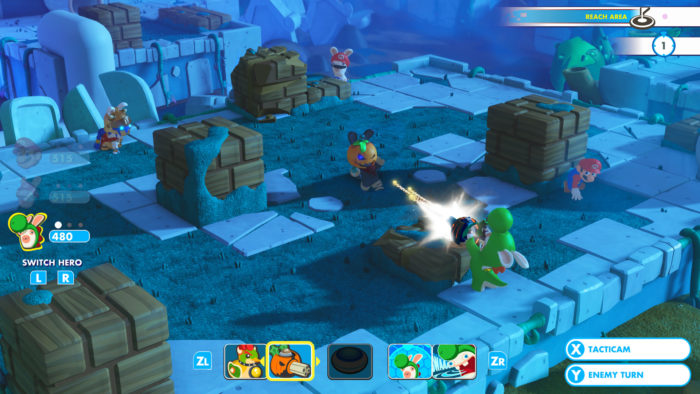 Much has been made of Mario + Rabbids Kingdom Battle’s similarities to X-Com, and with good reason. That Kingdom Battle’s tactical combat was heavily inspired by the sci-fi military shooter series is obvious to anyone who’s played both.

Ubisoft Milan Creative Director Davide Soliani has made no effort to hide that inspiration, either. In fact, he apparently tried to recruit friend and X-Com creator Julian Gollop to work on Kingdom Battle with him. According to PCGamesN, Gollop might have said yes to his friend’s request too, had he not been busy with another project.

“When I was at Ubisoft Sofia he was, and still is, working for Ubisoft Milan and I visited him a couple of times,” recalled Gollop. “We had conversations about project ideas… he was a fan of my previous games, like Laser Squad [Nemesis] and stuff like that, and he was really into his strategy and turn-based ideas from the beginning.”

About three years ago, Soliani called Gollop and asked if he’d come work on a mystery project with him. Gollop, however, had recently departed Ubisoft to start indie studio Snapshot Games where he worked on Chaos Reborn, which he released for PC in 2015.

“I didn’t know at the time that the project he was talking about was Mario + Rabbids, he couldn’t say what it was,” Gollop explained. “Nevertheless, had I been at Ubisoft I may have worked on it.”

Reportedly too busy with his next game, Phoenix Point, Gollop hasn’t had a chance to play Kingdom Battle. Still, he sees the game as being in the same genre as X-com despite having “a rather unusual setting, which is brilliant.” The Rabbid-infested Mushroom Kingdom setting aside, Gollop sees the turn-based, tactical combat as being pulled right from X-Com.

“Although it doesn’t have much of a strategic layer as such, the connection with the modern XCOM systems is so obvious that it has to almost fall within the same genre.”

Mario + Rabbids Kingdom Battle released for Nintendo Switch on August 29. Twinfinite gave the game an Editor’s Choice award, calling it “yet another fantastic game you should have in your library if you own a Nintendo Switch.”