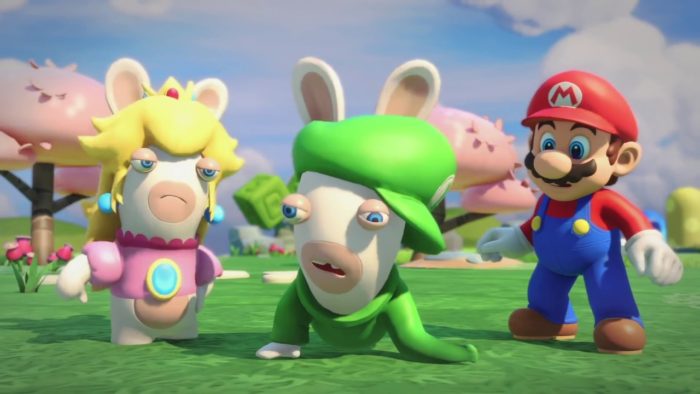 Without a doubt, Mario + Rabbids: Kingdom Battle is the surprise video game hit of 2017. With rumors swirling around earlier this year about a Mario and Rabbids crossover game, we weren’t very impressed, to say the least. But we promptly changed our minds following the official E3 reveal, as we got a glimpse of the tactical RPG gameplay, and just how well the slapstick humor of Ubisoft’s crazy Rabbids could gel with Nintendo’s iconic characters. As someone who isn’t all that taken with either Mario or the Rabbids, Kingdom Battle is a game that’s captured my attention for the entirety of its run time, and that is one commendable feat.

Our story starts when the insane Rabbids get their hands on a VR-like device that allows them to fuse with nearby objects, including Nintendo amiibo and merchandise. As the mischievous Rabbids get a little too out of hand, they accidentally zap themselves into the Mushroom Kingdom, tearing open a portal of darkness in the sky. In the process, a few of the Rabbids also find themselves fused with figures of fan-favorite Nintendo characters, including Mario, Luigi, Peach, and Yoshi. However, while these Rabbid-Nintendo hybrids seem to be peaceful, one particular Rabbid (named Spawny) has fused itself with the powerful device, and it might be the key to stopping all of this madness in the Kingdom.

Thus, it’s up to Mario, his new Rabbid friends, and a very grumpy Roomba-like robot named Beep-0 to restore peace to the Mushroom Kingdom.

The overarching story itself isn’t exactly Oscar material, but Ubisoft succeeds at making every step of the journey entertaining to boot. The Rabbids just have this certain charm to them that’s only enhanced in the way they interact with Mario and crew. Beep-0 just wants to rally the crew together to find Spawny, and grows hilariously frustrated whenever no one listens to it. And poor Mario’s caught in the middle of it all, trying to keep the peace.

Rabbid Peach, in particular, was at the forefront of all of Ubisoft’s promo materials for the game, and rightfully so. Despite only being able to say “Bwah,” Rabbid Peach simply oozes character and personality because of her cute animations, facial expressions, and the way she tries to keep Mario all to herself while waving the real Peach away. Much like the real Luigi, Rabbid Luigi plays the hapless sidekick character who provides comic relief in the form of adorably dopey expressions. Rabbid Mario is like an exaggerated caricature of his counterpart, as he constantly twirls his mustache in front of Peach while flexing his (non-existent) Rabbid muscles. Not to mention the various Rabbids you can observe all throughout the world. 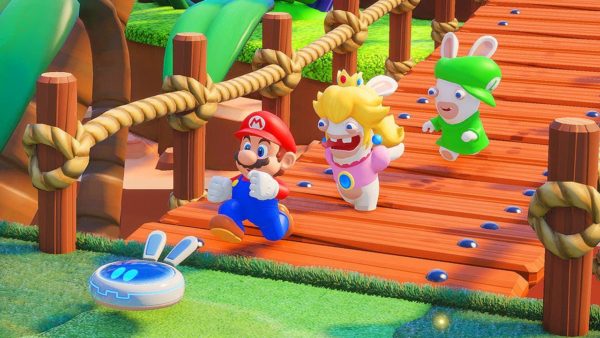 Even the bosses have pep and energy to spare. From a purely aesthetics standpoint, they’re all very well-designed, complete with quirks that really bring their personalities to life. Despite looking completely different from the original character, Rabbid Kong has defining traits and characteristics that make him stand out. He pounds angrily at the ground when he’s out of bananas, and he’ll pick up Rabbid Peach and use her as toilet paper (yes, really) when she’s right in front of him. The bosses are always a pleasure to duel against, not just because of how colorful they look, but because of the fighting mechanics as well.

Which brings me to the meat and potatoes of Mario + Rabbids: Kingdom Battle. At its heart, the game is a tactical RPG in a similar vein to titles like Final Fantasy Tactics, XCOM, with even a dash of Disgaea thrown in there for good measure. Players get to control three characters on their team at any given point in time, and once you’ve made all of your moves, it’ll be the enemy’s turn to respond. Fairly standard stuff for the genre.

However, with a total of eight playable characters all equipped with unique abilities and techniques, this means that you have a lot of different skill sets to work with. Mario is a well-rounded character who has to be in your team at all times, but the remaining two slots can be given to whichever characters you fancy. Rabbid Peach is a healer type of character who can heal her allies within range, and can also withstand weapon attacks with a Shield technique. Peach herself is a different kind of support character who can increase the defense of allies within range, while also blasting away weak cover with her devastating weapon, and throwing bombs to hit enemies hiding behind obstacles. As a character who’s typically known for hiding away in a castle while waiting for Mario to save her, it’s very refreshing to see Peach touting a giant gun, causing all sorts of havoc and explosions on the battlefield. There’s so much to work with here, and there’s plenty you can do to make your team composition truly unique.

The tactical gameplay itself is satisfying, as you’re able to use the Tacticam to get a bird’s eye view of the map, plan out your strategy, and take out your enemies like clockwork. The difficulty curve is pretty gentle for the most part, as the game gets you comfortable and introduces you to the various abilities one by one. However, the game will punish you for getting too complacent. The enemy AI is pretty intelligent, and even outside of that, there are quite a few enemy types with different mechanics to keep track of, and this will likely force you to change up your strategy on the fly. For instance, the Bucklers are equipped with shields and can only be attacked from the rear, while the Smashers are devastating bruisers that will inch closer to you if you attack them, but are bogged down by limited movement range. There’s a healthy variety in enemy types, and that keeps the game from ever feeling stale or too easy. The regular battles never quite reach Fire Emblem Fates: Conquest levels of hard, but you will run into complex maps or enemy combinations that give you pause, and might even force you to reset once or twice. 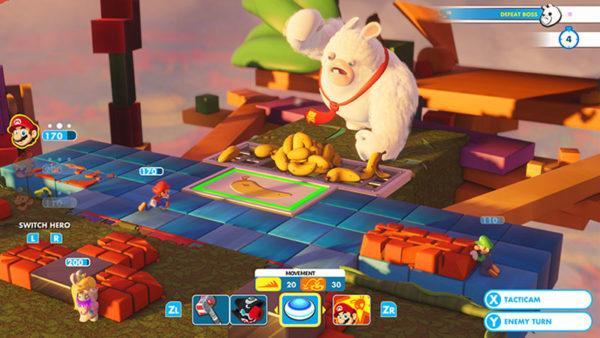 Once you reach the first boss of the game, though, the difficulty really ramps up. The Pirabbid Plant was the first boss I encountered in the game, and I’d played against this same foe when I got to check out the game at E3 earlier this year. I found the E3 demo to be fairly challenging, but I was able to get through the fight on my first go with careful management of my techniques. However, I must’ve been playing on an easier difficulty in the demo as my experience in the full game was completely different.

The Pirabbid Plant was relentless, and the mob enemies surrounding the map’s edges didn’t make things any easier. I was forced to think up new strategies to try to get the edge over this boss, and even the slightest mistake in my opening moves could easily cost me the entire match. It was a tense battle, and I only managed to beat it on my fourth attempt after losing two characters. For the most part, the boss fights are all pretty much like that – a real step up in difficulty, and a challenge that makes sure you won’t get through unscathed. Mario + Rabbids: Kingdom Battle might look inviting with your favorite Nintendo characters and the adorable Rabbids splashing on the cover art, but this is a well-made tactical RPG that will certainly challenge you.

Outside of battles, the game world itself is littered with things to do and look at. There are treasure chests housing collectibles, weapons, and upgrade resources. There are plenty of hidden alcoves and little areas that you can access to find more treasure chests and rewards. There are little environmental puzzles that you’ll have to solve in order to progress through the area, and there are even secret stages that you can access to unlock new weapons for your party. There are coins to be collected all over the world, which can be put into purchasing new and better weapons for your party, along with Power Orbs which are used to upgrade a character’s individual skills and techniques. And once you’ve cleared a world for the first time, you can re-explore it to uncover a secret chapter and other challenges.

Mario + Rabbids: Kingdom Battle is already packed full with content, but Ubisoft has opted to include a co-op campaign as well. These are mini battles you can partake in with a friend, where each person takes control of a team with two characters. The interesting part of this co-op aspect is that friendly fire is turned on, so you’ll have to be extra careful if you’re using a character like Peach, whose weapon has a wide hit area. These are a nice addition if you’re itching to experience the game with a friend, though I personally didn’t find these mini campaigns to be as engaging or fun as the ones we got in the main story.

I suppose this is the part of the review where I have to reveal a critical flaw in the game that keeps it from being as enjoyable as it should be. But frankly, the complaints that I do have never really detracted from my experience in any serious or game-breaking way. From a gameplay perspective, I am slightly miffed that the game never asks you to confirm your selection after you’ve moved a character around. Once you select a tile during a character’s turn, they’ll move there, and there’s no turning back. This doesn’t really sound like a problem on its own, but it can be a tad frustrating if you misclicked, or selected the wrong tile by accident. In the later worlds, where the regular battles get challenging enough and your opening moves become so crucial, simple misclicks can result in you having to reset the fight. The simple addition of a confirmation prompt would alleviate this issue entirely, and I wish Ubisoft had included that in the game.

From a technical standpoint, I did also encounter some minor hiccups with the game during extended play sessions. There were some instances when I’d activate a technique on a character, and the game would suffer massive slowdown where the frame rate plummeted during the animation. There were also instances where the game would just pause for a few seconds during the enemy turn, and I’d be unable to do anything while waiting for the game to just do its thing. Prior to entering the game’s third world, enemy turns always went by quickly and smoothly, so the extended waiting period in the third world threw me off a little. None of these issues ever caused the game to crash, so they’re not all that serious, but they are there.

All in all, though, Mario + Rabbids: Kingdom Battle is yet another fantastic game you should have in your library if you own a Nintendo Switch. It’s clear that Ubisoft respects the sanctity of these iconic Nintendo characters, and the game certainly does them justice. Kingdom Battle might not be the most challenging tactical RPG around, but it does offer a satisfying combat flow, and provides ample opportunities for players to come up with interesting strategies and team compositions to complete a map with. The Rabbids serve as the special X-factor ingredient that really makes this game pop with life, and the result is an all-around fun game that can be enjoyed by both children (maybe on Easy difficulty) and adults alike.