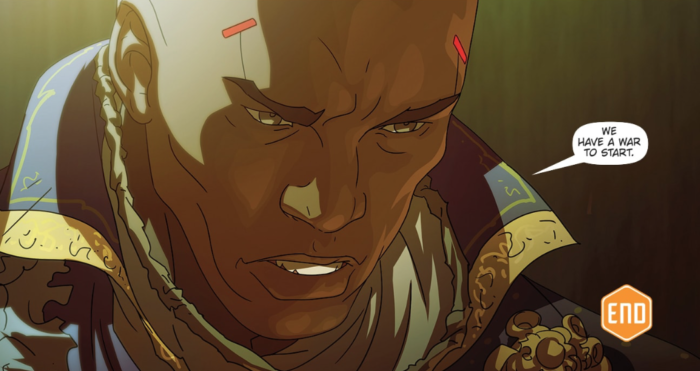 If there was ever a character more highly anticipated and discussed prior to their release than Sombra it was Doomfist. Now that the incredibly strong heavy hitter is out on PTR, discussions about his backstory and theories about the true depth of his impact in the world of Overwatch have been at an all time high. Well, Overwatch’s latest comic focuses on the game’s newest addition to the cast and dives a bit deeper into Doomfist’s relationship with Talon so all your fan theories can get a little more complicated.

The Overwatch comics have had a wonderful way of presenting just as much mystery as they do clarity when they explore heroes’ origin stories. The latest comic, Doomfist: Masquerade, is no exception. As far as answers, we now see that Reaper is not the true head of Talon. While there are some suggestions that Talon is being run by a group of leaders rather than just one true head, Doomfist certainly emerges as the most dominant force in this particular comic. So much so that he even keeps some vital bits of information away from Reaper while choosing to disseminate other important details to Widowmaker instead.

This is where the most fascinating part of the comic lies. This is the first time we are seeing the real power dynamic, and all of its struggles, within Talon. Reaper is clearly still being haunted by his past and his thirst for revenge. Doomfist emerges as an unofficial leader who is willing to use brute force to keep Talon operatives in line. Even the relationship between Reaper and Sombra becomes particularly interesting. It turns out that the stunt Sombra pulled during the mission at Volskaya went far from unnoticed. The good news for the skilled hacker, however, is that when Reaper reports her actions to Doomfist he seems to actually agree with her stance on keeping Katya Volskaya alive.

The dynamic that is exposed between all of these key Talon operatives is more than enough to fill up a comic by itself but Blizzard doesn’t stop there. Once Doomfist discovers that other Talon agents would rather see him locked away, he puts a plan in motion to make sure that his authority isn’t compromised. In other words, he wants to kill the Talon operative who is attempting to break the organization away from Doomfist’s influence. For the second time we see Reaper, Widowmaker and Sombra join forces for a mission. This time, however, Doomfist’s presence ensures that there is no funny business. We’re looking at you, Sombra. By the end of the mission Doomfist as successfully eliminated what seemed to be the key Talent agents who were questioning his authority and hoping to keep in locked away.

The comic ends with a scene that is extremely simple but begs quite a few questions. Doomfist’s confrontation with the unnamed Talon operative makes it clear that the terrorist organization is far more interested in profits than Doomfist is. This seems to be a stark contrast to Doomfist’s goals of igniting a war that he is determined to start. If the “boiling” tensions in London are anything to go by, it certainly seems like he is well on his way to kicking off a massive war between humans and omnics.

Why? Well, that’s the part we just can’t seem to figure out.

Doomfist will finally make his way to console on July 27.