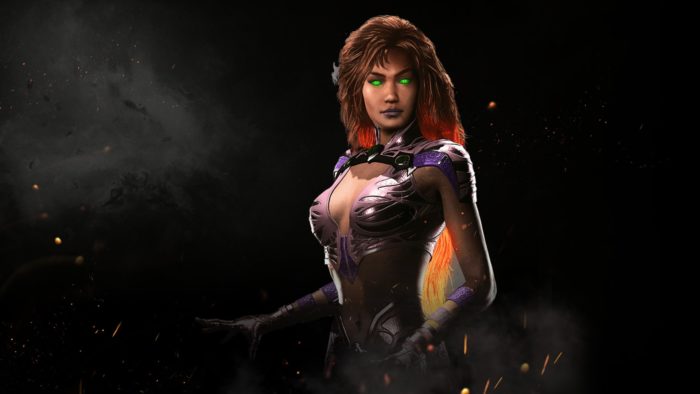 Injustice 2 has been off to a strong start when it comes to rolling out DLC characters with some serious potential and the first look at Starfire’s moves suggests they have another great addition on their hands. It hasn’t even been a full 30 days since SubZero was added to the game and yet NetherRealm is wasting no time building up the hype for their next DLC character. A new trailer gives us the first look at Starfire’s actual move set and boy does she have some serious zoning potential.

As you probably expected of the Tamaranian, she has a kit that is filled with projectiles, emphasizes her maneuverability and gives her multiple ways to close the gap between her and her opponent should she choose to do so. Of course, with the moves we’ve seen Starfire put on the screen so far, it looks like it won’t be necessary for her to rush down opponents unless you really just want to see her soar across the screen. And nobody can blame you if that’s your choice because she does look cool as she dives into her opponent.

The gameplay trailer also gives a first peek at Starfire’s super, the very same super that Ed Boon claimed was one of the “most epic” supers in the game. While her super isn’t necessarily as complex or filled with as many different varying attacks as others, it certainly comes across as one of the most devastating. Boon promised that Starfire’s super delivered in scale and he was right. Starfire hurls her enemies into the air while blasting them on their way up to outer space. Once they are a safe distance away from earth, however, Starfire unleashes her true power and goes Supernova.

Watching Starfire soar across the screen and show off a variety of different attacks can be pretty exciting. Exciting enough to make you almost overlook one of her opponents in the trailer. What appears to be Superman at first glance is actually our very first sneak peek at Bizarro. It looks like Bizarro won’t be added in the game as a new character but will instead be added as an alternative skin for Superman. He looks almost identical to Superman at first glance but the dead giveaway to his true identity is when he shoots Starfire with fire breath and shoots ice beams from his eyes. For now we have no idea if Bizarro will get any other alternative moves but the alterations to Superman’s laser beams and ice breath is already a really nice touch.

Starfire will finally arrive in Injustice 2 this August.