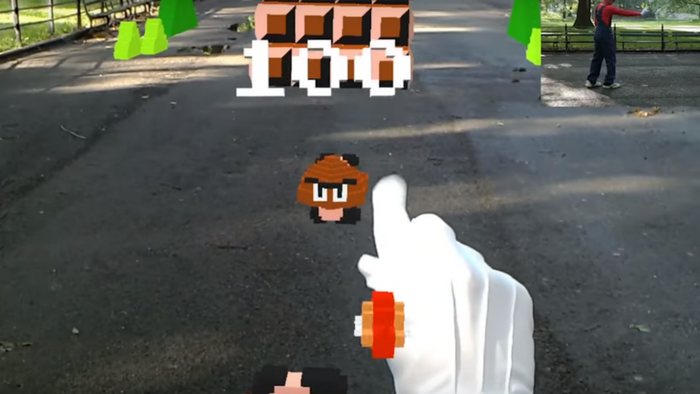 Everyone knows Super Mario Bros., but there’s no way you’ve ever seen the game like this before.

Developer Abhishek Singh has taken the classic game and recreated it within Microsoft’s augmented reality platform HoloLens. Utilizing the HoloLens headset, Singh has recreated the iconic World 1-1 from Super Mario Bros. right in the middle of New York’s Central Park.

From Goombas to warp pipes, every part of the level has been lovingly recreated for the wearer of the HoloLens headset, which resulted in the cheeky video of the experience you see below.

While Singh’s prototype is no doubt impressive, it can’t of course do much with the area the game is using in real life. It might work better with a bunch of hills or drop-offs. Seeing a man walk around in overalls a la Mario while wearing a headset like the HoloLens is funny enough on its own, especially since we can’t see what he’s seeing.

What’s intriguing about this recreation is the idea that in the future, we could see real-life spaces totally dedicated to making augmented reality as believable as possible. This particular project wasn’t sponsored by a company or a developer, either. In the future we could see some particularly amazing developments that utilize the HoloLens or other tech to create worlds from your favorite games. When looking at videos like these, it doesn’t seem like it’s all that far off.