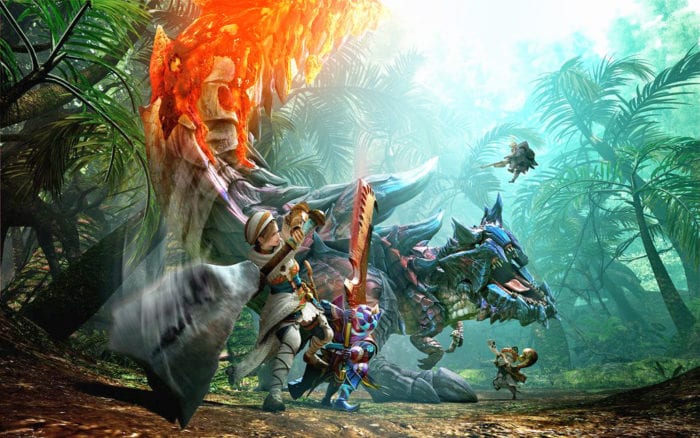 This year’s E3 hasn’t even arrived yet and we may have already received the first clue that will likely fuel E3 2018 predictions a year from now. There has been a lot of exciting news floating around regarding the Monster Hunter series. Fans of the series were surprised to see Monster Hunter XX would be a Nintendo Switch exclusive and it turns out that Capcom is preparing to bring Monster Hunter Stories to the West. That’s enough to feel pumped up about the franchise’s future but it looks like there is still even more Monster Hunter news to be shared. Capcom recently filed a trademark for “Monster Hunter: World” on June 5.

Now, you may be excitedly wondering if Monster Hunter: World is actually going to be a huge theme park. Who can blame you? It sounds like one. Not to mention Super Mario World fever has been spreading like wildfire and now we’re all pondering what other franchises could pull off having their own entire theme park. Unfortunately, that’s not happening here. This is exactly what you think it is… another new Monster Hunter game already cooking in Capcom’s mind. The US Patent and Trademark Office has tagged “Monster Hunter: World” as “video game software,” “downloadable computer game,” “downloadable game program for playing on mobile phones and smart phones” and “downloadable screen saver software and wallpaper software for mobile phones and smart phones.”

It seems clear that this yet another addition to the Monster Hunter series but it’s still impossible to say if the game will actually come to fruition or what kind of game it will even be. With a title that utilizes the word “world” it certainly seems like a game that will have online and social features at its helm but here’s another interesting yet far less likely proposal.

What if Monster Hunter: World is going to be Capcom’s approach to a Pokemon GO-esque mobile game. Just imagine walking around your community, meeting other potential monster slayers, teaming up to battle monsters wreaking havoc on a particular area, completing daily objectives to obtain new gear and weapon upgrades and, of course, making your way to designated fire pits to prepare your meat. It’s a far-fetched idea but one that also sounds like it could be fun and far more interactive on a social and gameplay level than Pokemon GO.

Other gamers believe the game may be taking a different approach to the “world” concept by suggesting a blending of different worlds. Of course the MMO angle has also been floating around and garnering some attention and others have actually guessed that it may actually become some sort of expansion and not a stand alone game of its very own.

Even though "worlds" sounds like an MMO name, the rumor is that it's monster hunter in the modern world, no? An intersection of "worlds"

Either way, this is all wild speculation and hopeful daydreaming so it’s important to understand that Monster Hunter: World may be a project that never even sees the light of day. Developers rush to file trademarks for potential projects just to make sure they are legally covered in the event they actually pursue that project. Filing for the trademark is in no way a guarantee that Capcom is even sold on the very concept of Monster Hunter: World—whatever that may be.