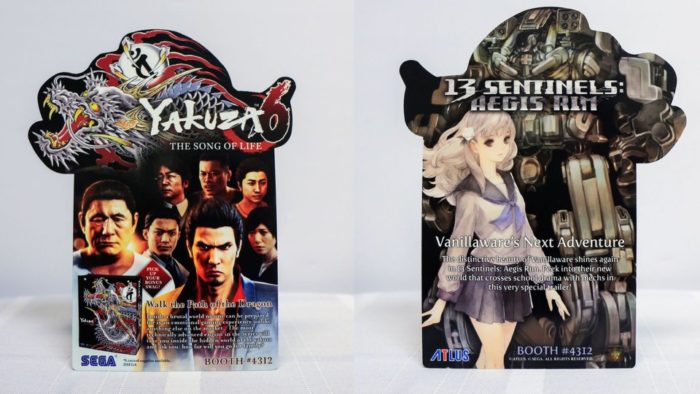 Atlus has decided to merge with Sega for the E3 2017 badge by combing two of their upcoming titles on both sides. Gematsu shares that the badge insert highlights both 13 Sentinels: Aegis Rim and Yakuza 6: The Song of Life on the other.

Their E3 2017 badge has two respective blurbs that reveal more about the games. For Yakuza 6, it reads as:

“Inside a brutal world no one can be prepared for is an emotional gaming experience unlike anything else on the market. The most technically advanced engine in the series will take you inside the hidden world of the yakuza and ask you: how far will you go for family?”

“VanillaWare’s next adventure. The distinctive beauty of VanillaWare shines again in 13 Sentinels: Aegis Rim. Peek into their new world that crosses school drama with mechs in this very special trailer!”

Judging by the E3 2017 badge, it seems like both Atlus and Sega plan to share more details about Yakuza 6 and 13 Sentinels. Vanillaware’s sci-fi game was also recently announced for localization making the event the perfect place to reveal more information.