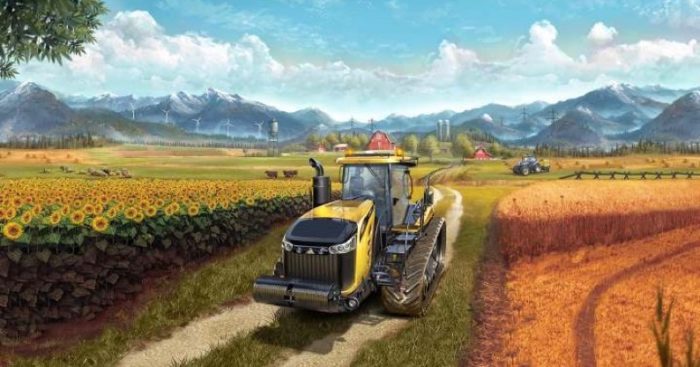 Farming Simulator 18 is exactly what it sounds like. You spend your time harvesting grain, managing your resources, driving slow moving vehicles across plots of land to refuel and drop off the fruits of your labor. It’s a deliberately paced title that runs surprisingly well on the aging Vita.

The game wastes no time in throwing you onto your farm and putting you behind the wheel of a vehicle. A quick readout of the controls is displayed and off you go. You are then taught the basics of harvesting and dropping off materials for profit, as well as how a basic day plays out. But the game itself often leaves you to your own devices, giving you enough information to tell you where to go to refuel. The game will display tutorials when you attempt a new task for the first time, but it’s up to you to actually discover these tasks.

The gameplay loop is fairly repetitive in the early going. You’ll harvest grain, load it into a tractor, drive it to a silo, till the soil, and plant some more seeds to harvest. You’ll also need to keep an eye on your funds and gasoline in the meantime, but as you learn the ropes, things will be pretty simple. But the action-packed gameplay rears its head once you start harvesting heaps of grain and the cash begins to roll in. More money means more fields, which in turn means more grain to harvest to bring in even more money.

A lot of the fun is derived from the tactical aspects of the game. If you want to make the most of the money you’re spending and earn it back as fast as possible, you’ll have to maximize your time and efforts. So, you must know when to use the auto-pilot feature, which costs in-game currency and completes tasks for you, albeit at a slower pace. The AI is also quite wonky, not following directions and often getting turned around mere minutes into a job before abandoning it completely.

As a portable version of the popular simulator series, the PS Vita version gets the job done, but there are clear hardware limitations. The system’s joysticks aren’t the most precise, making it a bit more difficult to pilot massive pieces of machinery. The front touch screen is used to easily access the game’s various options and menus, the majority of which are accessible from the game’s HUD.

The game is also a bit of an eyesore. The textures are bland and flat, conveying what they need to and not going much further. There is a sizable chunk of land to explore but everything looks eerily similar and there’s no easy way to navigate through it. Brown rocks close in a series of fields surrounded by gray industrial buildings, blue tanks, and fields of flat, off-green grass.

The gameplay is the main draw in Farming Simulator 18. If you aren’t a fan of simulation games then the Vita version of the game won’t change your mind, but if you’ve been craving the non-stop thrill ride that is Farming Simulator on the go, then this is the place to get it.

While actually performing actions is tedious and long, and at times it is very much more of a passive experience, with the player simply telling the machines where to go and how to operate, successfully managing your farm is much tougher than it sounds.

The auto-drive feature is a necessity, so you need to ensure that you have enough money coming in that you can be using it constantly. Timed missions also help to switch things up, disrupting the standard flow of the game and asking players to think on their feet.

The format has once again been successfully translated into a portable format. It doesn’t stack up to its counterparts on consoles or PC, but it’s certainly a serviceable port. The UI can be cumbersome and unintuitive, and the gameplay itself is incredibly slow paced, but the simulator style has made the transition largely unscathed.